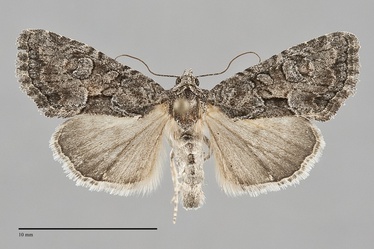 Neoligia tonsa is a small moth (FW length 11–13 mm) that is widely distributed east of the Cascades and flies from late spring to fall. It has a mottled gray forewing that has a dark gray terminal area, a black median dash, a pale-filled reniform spot, and often a blackish gray or wine-tinted median area. The forewing is mottled ash-gray with a variable pattern of charcoal gray and claret. Although almost too variable for classification there are several common forms. In one the entire wing is similar gray, usually with a black median dash, darker terminal area, and sometimes with a slight red flush on the mid-terminal area. A second form has charcoal gray on the wing base that extends distally to the proximal or distal median area, sparing the portion distal to the reniform spot. A third form has patchier blackish gray from the costa through the cell between the orbicular and reniform spots, on the trailing margin basal to the antemedial line, and a thicker than usual median dash. Some specimens have a triangular black mark near the anal angle distal extending distal to the mid-subterminal area. The basal and antemedial lines are gray, double, only clearly evident in specimens in lighter specimens. The antemedial line is finely undulating and arched toward the lateral margin. The median line is gray, evident on the costa in some specimens and evident across the wing in others. The postmedial line is gray, double, and filled with light gray, lightest near the posterior margin. The segment around the reniform spot is lightly scalloped and faint, often most evident as lighter filling, and the posterior segment is smoothly concave toward the base. The subterminal line is pale gray, diffuse, and irregular. It is preceded by a gray shade that is widest and darkest opposite the cell and in the fold. The terminal line is thin, black. The fringe is checkered medium and dark gray. The orbicular spot is a slanted oval, obscured in some dark specimens but usually filled with the ground color or slightly lighter gray with a faint central ocellus. The reniform spot is large, kidney-shaped with the lower portion extended laterally, outlined by a double gray line and filled with the ground color or whitish gray. The claviform spot is small, dark gray to black. The hindwing is light tan-gray, darker gray toward the margin with a dark thin terminal line. The hindwing fringe is two-toned gray. The head and thorax are medium to dark gray. The male antenna is filiform.

This species can often be recognized by its relatively large size for a Neoligia, ash-gray ground color, and relatively crisp markings. The elongate lower corner of the reniform spot is unique in the genus. Definitive identification requires examination of the genitalia. The male valves can be examined after removing the scales from the end of the abdomen with a small brush. The distal valves of N. tonsa are asymmetrical, and the ventral processes are relatively short and spike-like. Those of N. lancea and N. albirena are longer and curved, and those of N. lillooet are very short and are barely visible. Females are best associated with the males but can be determined after dissection as described and illustrated by Troubridge and Lafontaine (2002).

This species is common and widely distributed in all types of habitats at low to middle elevations throughout the Pacific Northwest.  This includes coastal rainforests, oak savanna, mixed hardwood-conifer forests, and open grasslands west of the Cascades, and open ponderosa pine forests, juniper woodlands, and dry sagebrush steppe east of the Cascades.  It is particularly common in drier, more open habitats in southern Oregon.

Neoligia tonsa is found east of the Cascade Mountains and Coast Range crests as far north as south-central British Columbia near Lillooet. It appears to be restricted to the Willamette Valley in Oregon west of the Cascades. It is particularly common in southeastern Oregon in our region.

The range of this species is the American West, from southern Alberta and British Columbia to northern New Mexico, northern Arizona, and southern California.

Neoligia tonsa has a long flight season that lasts from late May through September. It is most commonly collected during July and August. This species is nocturnal and comes to lights.