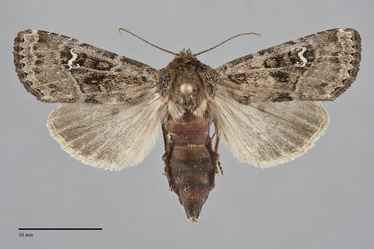 Resapamea diluvius is a medium-sized (FW length 16–19 mm), gray-brown moth that flies in dry sand habitats during late spring and early summer. It has a whitish reniform spot and pale vines on the lateral forewing.  The wings are covered with a mixture of brown, gray, red-brown and black scales and appears hoary gray-brown, sometimes gray-tan or reddish gray-tan. Most specimens have lighter gray veins, most evident along the cubital veins distal to the cell. Dark brown to black shading is often present between veins, especially near the reniform spot and in the terminal area. The basal and antemedial lines are indistinct, usually with only portions of the antemedial line evident posterior to the cell. The median shade is very faint. The postmedian line is incomplete, evident mostly as a partial dark medial line followed by pale filling, smooth, convex lateral to the cell and angled strongly toward the base posterior to the it. The subterminal line is pale, evident mostly because of dark preceding shading. The orbicular spot is a small oval, outlined in thin black in most specimens and filled with the ground or slightly paler scales. The reniform spot is moderate-sized and kidney-shaped, partially outlined in thin black and filled with white or whitish tan scales along the lateral margin. The claviform spot is small to medium-sized, black, and often smudged. The fringe is concolorous with the ground, often with pale streaks at the end of the veins. The hindwing is medium fuscous gray-brown, slightly darker in the outer third, with faintly darker smudged discal spot and veins and a paler fringe. The head and thorax are the same color as the forewing ground, lacking dark or pale accents. The abdomen is similar. The eye is round and smooth. The male antenna is bead-like.

This moth is most likely to be confused with Resapamea passer, a much more common and widespread moth in our region. Resapamea diluvius is only known from sand habitats in the dry interior of our region and can usually be recognized by the combination of gray-brown forewing with light veins and pale reniform filling and spring flight period. Some specimens of R. passer can resemble R. diluvius but are less hoary brown, lack gray veins, and have yellowish filling of the reniform spot. These species also differ in details of the male and female genitalia and the cytochrome oxidase (CO1) gene sequence as described in the original description of R. diluvius (Crabo et al. 2013 available as a free download from ZooKeys).

Resapamea diluvius flies over sandy soils in the dry interior of the Pacific Northwest and is most commonly found in dunes.

This moth has been found most commonly in the interior of the Columbia Basin in central Washington. It also occurs along the Columbia River in northern Oregon.

The global range of R. diluvius is poorly known due to its recent description and confusion with R. passer. Specimens likely to be this species have been examined from sandy areas in the Great Plains and northern Nevada suggesting that it might be widespread in western North America.

The early stages of this moth are unknown. Crabo et al. (2013) speculate that the foodplant is the dock Rumex venosus which grows commonly in the sand dunes over which the moth flies. Several other Resapamea species feed on Rumex as larvae.

Adults of R. diluvius fly during the spring and early summer and have been collected from late April to early June in the Pacific Northwest. They are most common in May and early June. They are nocturnal and come to lights, often in large numbers in the proper habitat.