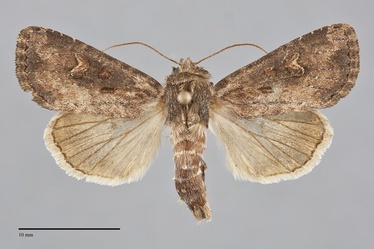 Resapamea passer is a medium-sized moth (FW length 15–19 mm) that flies in lowlands on both sides of the Cascade Mountains during the summer. Its dull brown, red-brown, or yellow-brown forewings have a black claviform spot and often additional black spots that include the outline of the reniform spot. The most common form in most of its range is dull dark brown, but dark red-brown and mottled gray and tan forms are not infrequent. The terminal area is slightly darker gray in some specimens. In a few of the lighter specimens, there is an indistinct darker gray-brown suffusion on the mid- and anterior wing, proximal to the postmedial line. The basal and antemedial lines are variable. The basal line is usually absent, occasionally evident on the costa. The antemedial line is gray occasionally bordered by a light shade of the ground color, slightly slanted toward the outer margin and toothed toward the base on the veins. The median line is usually absent, occasionally visible as a diffuse gray shade in light specimens. The postmedial line is a scalloped gray line bordered by a slightly lighter shade of the ground color, S-shaped with a smooth curve around the end of the cell and a inwardly concave segment below the reniform spot. The subterminal line is often absent, light tan in light specimens, undulating. It is preceded by a gray shade in light specimens. The terminal line is a series of black triangles. The fringe matches the ground, slightly checkered in some specimens. The orbicular spot is variable, absent, evident as slightly lighter filling without a dark outline, or round, oval, or teardrop-shaped outlined in a thin to thick black line. The reniform spot is moderately large, kidney-shaped, outlined in gray to thick black, and filled with the ground color, dull pale ochre, or a combination of the two colors. The claviform spot is small to moderate-sized, thin, often thick black with a thicker anterior segment, occasionally absent. The hindwing is pale gray-tan with a slight gray suffusion toward the margin and darker gray veins, discal spot, and terminal line. The hindwing fringe is light gray-tan. The head and thorax are dull red-brown, tan, or dark brown, matching the forewing color. The male antenna is bead-like.

Dark brown specimens of this species with black spots are relatively easily identified in most of its range. The exception is in central Washington and northern Oregon where there is a very similar moth, Resapamea diluvius, that flies in sand habitats. It occurs slightly earlier in the year (April to early June), is grayer brown with pale gray veins on the outer forewing, and has paler whitish filling of the lateral reniform than is typical for R. passer. Elsewhere, R. passer could be mistaken for Graphiphora augur, a brown species in the tribe Noctuini. It has a more strongly scalloped postmedial line, a more elongate oval orbicular spot, less conspicuous claviform spot with similar thickness anterior and posterior outlines, and fewer pale scales in the reniform spot than R. passer. Red-brown specimens of R. passer resemble the most common form of Resapamea innota in our area, but this species lacks black markings and has ochre-tan filled orbicular and reniform spots. Some pale coastal specimens of R. passer are similar to Resapamea venosa, but this species is usually bright light orange-yellow with a large yellow heart-shaped reniform that is larger and more constricted than that of R. passer. It also has dark veins on the distal wing that R. passer lacks.

This species is widely distributed throughout much of North America in wetland habitats.  In the Pacific Northwest, it is usually uncommon and sporadic, and is mostly found around marshes and in the riparian zone along creeks and rivers at low elevations. It is most commonly found near the ocean in Northwestern Washington.

This moth has a fairly large range in North America, extending to the Atlantic Coast. It ranges from central Alberta to northern Arizona in the Rocky Mountain region and is widespread in the mid-Continent from Minnesota and southern Ontario to Oklahoma and North Carolina. It reaches the Atlantic Coast from Newfoundland to Maryland.

This species is a foodplant specialist with larvae that bore into the stems and roots of dock (Rumex spp.) and perhaps knotweed (Polygonum spp.) in the Polygonaceae.