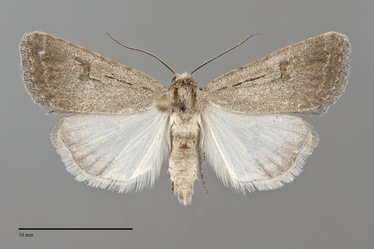 Caradrina atrostriga is a small, light tan-gray moth (FW length 12–14 mm) that flies in southern Idaho during late summer and fall. It has a black line through the cell medial to a "Z"-shaped reniform spot. The basal and median forewing is even tan-gray, becoming darker gray near the outer margin.  The transverse lines are indistinct except for the pale subterminal line. The fringe is concolorous with the terminal area. The orbicular spot is a long black dash, varying from faint to long and thick.  The reniform spot has a long basal extension from the lower end and a similar shorter extension lateral from the anterior aspect.  It is outlined in dark gray and filled with a dark shade of the ground color. The claviform spot is absent.  The hindwing is off-white with gray distal veins and ill-defined marginal band.  The hindwing fringe is mostly white, gray anteriorly.  The head and body are tan-gray.  The male antenna is filiform.

This moth can be identified by its southern Idaho distribution, even pale gray color, and black line in the cell.  It is most similar to Caradrina camina, a more widespread and common moth in the dry portions of the Pacific Northwest.  Compared to C. atrostriga, it is often smaller and more narrow-winged, brown rather than gray, and has darker spots with a less pronounced line through the cell.  Other Caradrina species, such as Caradrina montana, have a round orbicular spot rather than a long streak in the cell.

This moth flies in brush steppe and open juniper forest in our region, most commonly near the lower limit of trees.

Caradrina atrostriga has only been found in south-central and southeastern Idaho in the Pacific Northwest.  It is associated with the Middle Basin and Range Ecoregion.

The early stages of C. atrostriga are unknown.

The range of this moth includes northern and central California (MPG).  It is likely to be found in northern Nevada and Utah based on its distribution in Idaho.