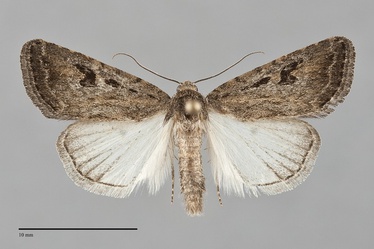 Caradrina camina is a small brown moth (FW length 10–15 mm) that flies in desert scrub during the fall. Its brown, pointed forewings are marked with black V-shaped reniform and linear orbicular spots. Males are larger than females and have longer and more pointed wings. The color is powdery gray-brown, becoming gradually darker gray toward the outer margin. The basal and antemedial lines are evident as dark spots on the costa or are completely absent, as is the median line. The postmedial line is also usually absent except at the costa, present as a gray thin scalloped line in a few individuals. The subterminal line is pale, slightly yellow, straight or very slightly irregular, and complete across the wing. It is preceded by a slightly darker shade. The orbicular line is dark brownish black, linear, varying in length from a short line in the cell to a long streak to the wing base. The renifrom is gray to black in outline, variably filled with gray to dark black-brown and occasionally completely absent. It is usually deeply indented along the lateral side with the anterior portion extended toward the wing apex. There is no claviform spot. The hindwing is pale whitish gray, variably darker gray with gray veins toward the outer margin. A thin terminal line is present, darkest in individuals with darker shading. The fringe is light gray to white. The head and thorax match the forewing in color. The male antenna is filiform.

This species is most likely to be confused with Caradrina atrostiga, only found in southern Idaho in our region. C. atrostriga has a long, black, orbicular spot that is similar to that of C. camina, but C. camina is slightly larger and has fainter forewing markings. Its reniform spot is Z-shaped due to extension toward the wing base, a feature that C. camina lacks.

This species is widely distributed on dry, open sagebrush steppe at low elevations east of the Cascades, extending to juniper woodland and lodgepole pine forests on volcanic ash soils along the east slope of the Oregon Cascades at middle elevations. It is locally common.  However, it was rare on sagebrush steppe that had been burned over in a wildfire, while it was common on adjacent unburned habitat.  Therefore, this species appears to be sensitive to fire disturbance.

The Pacific Northwest distribution of this species extends north to the southern part of British Columbia. It is widely distributed in the sage steppe of the Columbia Basin in Washington, the deserts of eastern and southeastern Oregon, and southern Idaho.

The global range of this species is poorly known to us.

No information is presently available regarding larval foodplants of this species, but herbaceous plants are suspected based upon related species.

The adults emerge in the late summer and fly through the fall. They are most commonly collected in September in our region. It is nocturnal and comes to lights.