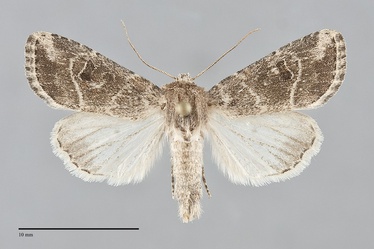 Anhimella pacifica is a rarely collected, small moth (FW length 12 - 13 mm) that flies in xeric regions during late spring and late summer. It has gray-brown forewing with smooth light-filled lines, a pale patch at the apex, and dark filling of the spots. The forewing is dull gray-brown, variable from light to moderately dark. The costa is darker, slightly so in the median area and more in the anterior subterminal area. A similar dark gray area is present in the anterior terminal area. These distal dark areas are separated by an oblique light patch that extends from the subterminal area to the apex. The double basal and antemedial lines are only slightly darker than the ground and most prominent due to lighter filling. The antemedial line is unusual in that it is slightly concave toward the base. The median line is faint gray, absent or evident from the reniform spot to the posterior margin. The postmedial line is double with darker medial component and pale filling, smooth without dark teeth, but sometimes with adjacent faint pale veins in the subterminal area, smoothly curved around the reniform spot and diagonal toward the base below the mid-cell. The subterminal line is vague, evident as a transition from light to dark near the apex and obsolete on the posterior wing. The terminal line is dark, interrupted at the veins, followed by a pale line. The fringe is similar to the ground color, weakly checkered in some specimens. The orbicular spot is pale, circular, filled with dark gray-brown. The reniform spot is bar-like, weakly hourglass-shaped, or half-moon shaped, pale on the lateral side and filled with dark gray-brown. No claviform spot is evident. The hindwing is tan off-white with faint gray shade near the margin and a thin dark terminal line. The hindwing fringe is nearly white. The head and thorax match the forewing color. The eye is covered with fine hairs. The male antenna is bead-like.

This species can usually be identified by its small size and gray-brown color, pale filled smooth antemedial and postmedial lines, a light mark below the apex, dark-filled forewing spots, and light hindwing. It is most likely to be confused with Anhimella contrahens, and we are not entirely sure that these are two separate taxa in the Northwest region. Compared to A. pacifica, specimens sorted to this species have more uniform dark forewings with less prominent filling of the lines and lack the pale subapical mark of A. pacifica. The lateral aspect of the postmedial line is smooth without dark marks on the adjacent veins. Protorthodes alfkenii also resembles A. pacifica. It is a common species in southern Oregon and flies in the fall. Its subterminal line is better defined and it has dark veins and a gray marginal area on the hindwing that A. pacifica lacks.

This species is found in relatively dry, open habitats.  It appears to be rare and sporadic in grasslands at low elevations east of the Cascades, and may be more common in dry grasslands or oak savanna in California.

Anhimella pacifica has only been found a few times in the Columbia Basin in Washington and in southeastern Oregon.

The range of this species extends through California along the West Coast. It has also been recorded from southwestern Arizona.

Adults of A. pacifica fly in the spring and again in late summer and might be double-brooded although this cannot be confirmed from the limited available data available for the Northwest. This species is nocturnal and comes to lights.