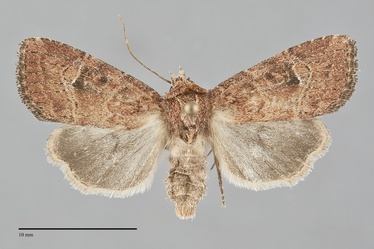 Anhimella perbrunnea is a small moth (FW length 12 - 14 mm) that flies west of the Cascade Mountains during late summer and fall. It has orange-brown forewings with a reniform spot with a white lateral border and dark filling. The forewing is relatively broad and medium-dark to dark orange-brown, slightly darker at the base, along the costa, and in the anterior and distal subterminal area. The veins are covered in a mixture of light and dark scales, appearing slightly darker than the ground color in light specimens. The basal and antemedial lines are a dark shade of the ground, double filled with the ground color. The antemedial line is slightly irregular and convex toward the outer margin. The median line is slightly darker than the ground, evident as an oblique dark mark between the costa and the reniform spot. The postmedial line is double, slightly darker than the antemedial line, weakly dentate with dark lines on the veins lateral to it, smoothly excurved near the lateral reniform spot and then slightly angled toward the base from the mid-cell. The subterminal line is slightly paler than the ground color, slightly offset below the costa and nearly straight elsewhere, preceded by a slightly darker shade that sometimes forms smudgy dark spots between the veins near the branches of the median vein. The dark terminal line is interrupted by the veins. The fringe is the ground color and gray, checkered at the base in some individuals. The orbicular spot has a pale outline, is small and round, and is filled a dark shade of the ground color. The reniform spot is outlined in pale, usually white on the lateral side, upright, weakly hourglass-shaped, filled with brown-gray that is darkest at the lower end. No claviform spot is present. The hindwing is gray-tan suffused with gray toward the margin, with similar gray discal spot and remnants of the postmedial line. The fringe is pale orange-tan, darker in darker specimens. The head and abdomen match the forewing color. The eye is covered in fine hairs. The male antenna is beserrate.

This species can be identified by its small size, orange-brown color, and the white lateral border of the reniform spot. It is similar to Anhimella contrahens, but it is dark brown without orange tint. Its hindwing is pale, lacking the dark shading of A. perbrunnea. Pseudorthodes irrorata is red-brown and similar in size to A. perbrunnea, but has white filling in most of the reniform spot.

Anhimella perbrunnea is predominantly distributed west of the Cascade Mountain divide in our area. A few records exist for further east in northern Idaho.

The range of A. perbrunnea is almost exclusively near the Pacific Coast. It occurs in California, very near the coast except in the northern part of the state.

This species appears to feed on hardwoods such as hazelnut (Corylus spp.) and alders (Alnus spp.) in the Betulaceae and vine maple (Acer circinatum) in the Aceraceae.

The flight period of this moth is late summer and fall, beginning in late July and lasting to mid-September in our region. It is nocturnal and comes to lights.