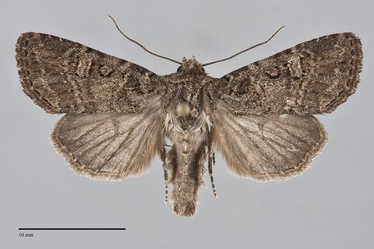 Orthodes noverca is a common, dull brown-gray, small to medium-sized moth (FW length 13–16 mm) that flies in a variety of habitats throughout most of the Northwest during the spring and summer. Its forewings have gray and black markings, typically with a fish-hook-shaped black orbicular spot that is open toward the costa. The forewing is mottled medium to dark gray-brown, sometimes with a slight olive cast, minimally darker at the base and in the subterminal area than elsewhere. A short and diffuse black, basal dash is usually visible. The basal, antemedial, and postmedial lines are dark gray, double, and filled with slightly lighter than the ground color. All are fairly smooth. The antemedial line bulges slightly toward the outer margin on the posterior half of the forewing. The inner component of the postmedial line is weakly scalloped. This line is located near the reniform spot, and is nearly straight with a slightly oblique course from the spot to the trailing margin. It is sometimes followed by a series of light and dark spots on the veins in the subterminal area. A dark median line is evident across the wing. The pale subterminal line is slightly irregular, forming a weak W-mark toward the outer margin. It is variably preceded or followed by dark marks between the veins, strongest on the mid-forewing. The terminal line is a series of dark lines between the veins. The fringe is colored as the ground color. The orbicular spot is outlined in black, usually thicker than the other lines and spots, and is incomplete anteromedially to form a fish-hook shape. The reniform spot is weakly kidney-shaped, black and gray in outline with a pale inner component and central filling of the ground color. Its anterior and posterior ends are weak or open. There is no claviform spot. The hindwing is dark brown-gray with slightly darker gray discal spot, marginal area, and veins. The fringe is two-toned with gray basal and lighter brown-gray distal components. The head and thorax are powdery gray-brown with a slightly lighter distal collar. The eye is densely hairy. The male antenna is bead-like.

This species is fairly non-descript in terms of color and pattern but can usually be identified by the incomplete black-outlined orbicular spot. Orthodes goodelli and Orthodes detracta are similar, but both have claviform spots. The orbicular spot of O. goodelli is pale, while that of O. detracta is black but completely outlined in black or weak posteriorly and anteriorly, unlike that of O. noverca. Orthodes noverca could potentially be confused with Aseptis binotata or Aseptis fumosa. Both of these species lack hairs on the eyes and have a slight notch in the outer margin of the hindwing that is lacking in Orthodes species. Similarly, Euxoa terrenus lacks hairs on its eyes. It also differs in that its orbicular spot is completely surrounded by a black outline.

This species was known previously as Orthosia delecta (Barnes & McDunnough) for a long time.

This species is common and widely distributed in brushlands and riparian habitats along creeks and rivers at low to middle elevations east of the Cascades.  It is particularly common in canyonlands.  West of the Cascades, it is more narrowly restricted to riparian zones and oak woodlands at low elevations.

Orthodes noverca is widespread east of the Cascade Mountains as far north as southern British Columbia. It is most common in the mountains and foothills but also flies in dry steppe. Its range is less extensive west of the mountains where it has been found near the Gulf of Georgia in Washington and British Columbia and in Oregon in the Willamette Valley and Siskiyou Mountains.

Orthodes noverca is a species of western North America. Based on limited information it has been collected in California, Utah, and Colorado outside of the Pacific Northwest region.

This species may be a foodplant specialist feeding on wild clematis (Clematis spp.) in the Ranunculaceae.

Orthodes noverca has a long flight season that lasts from April to late August in the Northwest. The phenogram shows peaks in May and July that suggest that it is double-brooded. It is nocturnal and comes to lights.