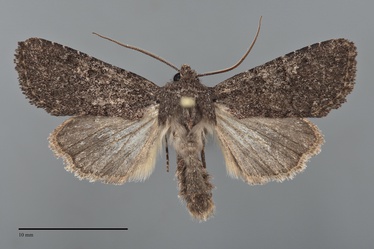 Rhabdorthodes pattersoni is a drab, brown, relatively small noctuid moth (FW length 13–13.5 mm) with indistinct pattern of lines and spots that flies in Rocky Mountain forests in Idaho. The forewing is uniform gray brown to dark brown, slightly darker on the costa and distal wing, with a series of faintly yellow spots along the costa. The transverse lines are double, black and dark gray brown, but indistinct. The points of the scalloped postmedial line form a series of parallel lines on the veins. The spots are outlined in black but are also indistinct. The orbicular spot is round, the claviform spot is small, sometimes just a spot, and the reniform spot is weakly figure-8 shaped, interrupted posteriorly. The hindwing is gray, palest at the base, with darker veins and a faint discal spot. Its fringe is gray with copper luster and pale base. The head and thorax are similar brown. The male antenna is bipectinate, about three times as wide as the shaft.

The male genitalia of Rhabdorthodes are unique in the a long curved rod extends from the juxta and the uncus is disproportionately small. Also, the male clasper is thick and sculpted, somewhat molarlike. Females have sculpted concave sides on the sternites of the last large segment (A7), shallow in the case of R. pattersoni but more elaborate in two Mexican species in the genus.

This moth resembles other nondescript brown Eriopygini such as Homorthodes and Protorthodes species, but is most similar to "Orthosia" noverca. Most "O." noverca have thicker and more prominent black forewing pattern elements than R. pattersoni. Rhabdorthodes can be identified without dissection by observing the ends of the valves for the chunky claspers in males and the concave sides of the seventh sternite in females. In addition, males of Rhabdorthodes have wide, biserrate antennae, unlike the simple antennae in lookalikes other than Protorthodes.

This moth is named in honor of Bob Patterson for his contribution to the study and enjoyment of North American moths. Bob created and maintained the Moth Photographers Group website for many years.

This moth is only known from Bear Lake County in southeastern Idaho in the Pacific Northwest.

The range of this species is the central and southern Rocky Mountains in the United States. Records from outside the Pacific Northwest are from Colorado, New Mexico, Utah, southern Wyoming, and eastern Arizona.

The larva is unknown. It is most likely a cutworm that feeds on forbs based on the life histories of related species.