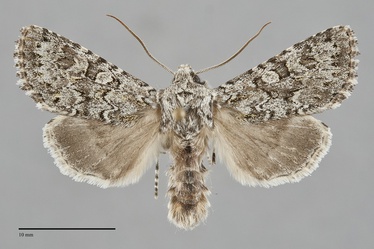 Psammopolia arietis is a medium-sized (FW length 14 - 17 mm), slightly brownish, silver-gray moth that occurs on unprotected Pacific Ocean beaches in late summer and early fall. Its forewing has a busy pattern of black lines and spots. The forewing is slightly mottled slightly brown-tinted silver gray, sometimes dark gray. The median and terminal areas are slightly darker in a few specimens. A thin basal dash is usually evident. The basal, antemedial, and postmedial lines are black, double, and filled with whitish gray. The lines are very irregular, and both the antemedial and postmedial lines are jagged near the trailing margin. The postmedial line is irregularly scalloped between the veins. The median line is absent. The subterminal line is irregular and appears dentate with dark teeth between the veins. The terminal line is black between the veins. The fringe is checkered light and medium dark gray. The orbicular and reniform spots are black, filled with light gray peripherally and darker gray centrally. The orbicular spot is round to oval and is fairly large. The reniform spot is strongly kidney-shaped and is also large. The black claviform spot is small, occasionally reaching the postmedial line which is drawn toward the base of the wing opposite it. The hindwing is light slightly yellowish gray with medium gray suffusion and faint discal spot and veins, a darker thin terminal line, and white fringe. The head and thorax are silver gray with darker gray edges to the collar and tegulae. The surface of the eye is covered with fine hairs. The male antenna is weakly biserrate.

This species is most likely to be confused with Psammopolia wyatti, with which it flies along the Pacific Coast. Psammopolia arietis is smaller and duskier than P. wyatti, and its spots are smaller and contain dark centers, unlike those of P. wyatti. On the Queen Charlotte Islands, P. arietis could be confused with Lasionycta haida, although this species flies above timberline. The subterminal line of L. haida is much smoother than that of P. arietis, and its forewing spots are filled with uniform, light gray with darker central filling like those of P. arietis.

This species is narrowly endemic to sand dunes along the beach of the Pacific Ocean.  These dunes are stabilized with beach grasses and herbaceous vegetation, or have a forest of lodgepole pine.  This moth is often common to abundant in this very restricted habitat.

Psammopolia arietis is found on Pacific Ocean beaches throughout our region. In Washington and British Columbia, it occurs along the unprotected western coastline and has not been found in more protected areas such as Puget Sound or the Gulf of Georgia.

This species has a large distribution along the Pacific Coast of North America, from southwestern Alaska to central California.

This species is a burrowing cutworm that burrows through the sand, and feeds on various herbaceous vegetation including beach peas (Lathyrus spp.) in the Fabaceae, beach knotweed (Polygonum paronynchia) in the Polygonaceae, sand verbena (Abronia spp.) in the Nyctaginaceae, and various grasses (Poaceae).

This species is single brooded and flies in late summer and early fall. The records from the Pacific Northwest are from late July to mid-September. It is nocturnal and comes to lights.