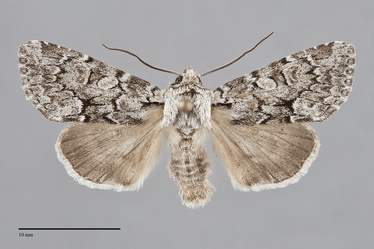 Eremobina claudens is a small to medium-sized moth (FW length 13–18 mm) that flies in forests during late summer and early fall. It has mottled gray forewings with a busy pattern of black and white lines and spots that include a basal dash, a long claviform spot, and a toothed postmedial line with a prominent posterior black and white segment. The forewing is mottled powdery medium gray to light silvery gray. The median and terminal areas are often slightly darker gray, and the posterior subterminal area is usually paler gray to nearly white. A thin black basal dash is often bordered anteriorly by pale gray. The distal veins are often dark. The basal and antemedial lines are gray to black, partially double and filled with pale gray. The antemedial line is evenly zigzagged between veins and slightly slanted toward the outer margin. The median line is dark gray, diffuse, usually evident near the costal and posterior margins. The postmedial line is gray bordered by light gray on the anterior half of the wing where it is evenly scalloped and smoothly excurved to nearly straight around the end of the cell, thicker black bordered by white on the posterior wing where it forms a prominent mark in most specimens. This portion of the line is usually toothed on vein 1A+2A. The subterminal line is pale gray, diffuse or better-defined and irregular, with a darker gray preceding shade or black wedges between veins. The orbicular and reniform spots are partially outlined in black and filled with light gray with or without darker central areas. The orbicular spot is large, oval. The reniform spot is kidney-shaped, usually weak laterally. The claviform spot is long and wide, spanning the median area and thickening where it touches the postmedial line. The hindwing is light gray with a slight yellow-tan tint, with diffuse gray marginal band, variably-present postmedial line, and darker thin terminal line. The hindwing fringe is pale gray with a darker gray base. The head and thorax are medium gray with incomplete black lines near the edges of the collar and tegulae in most specimens. The male antenna is biserrate.

This species can be identified by the combination of gray, black, and white color, basal dash, a long claviform spot, and white-and-black distal postmedial line with an irregular notch at vein 1A+2A. There are many gray and black moths in our area but none other than Eremobina unicincta has a similar long claviform spot and prominent black and white postmedial line. This moth appears to replace E. claudens in eastern Oregon and might eventually be recognized as a subspecies of it. It is more even gray, has thinner gray lines, and the prominent black and white segment of the distal postmedial line is smoother 1A+2A where it typically forms a smooth concave arc.

Eremobina claudens is geographically variable species in our region. Specimens from east of the crest of the Cascades are duller, darker, and less mottled than those from the coast. The name E. c. albertina is available for those who wish to distinguish these forms from nominate E. c. claudens, although the differences between them are relatively slight. The populations from further west near the Pacific Coast are larger, lighter silvery gray, and more mottled. They are recognized as subspecies E. c. hanhami.

The type locality of Eremobia hanhami Barnes and Benjamin, currently recognized as a subspecies, is [British Columbia], Vancouver Island, Duncans.

Eremobina claudens is primarily found in meadows and bogs in the north Cascades and Rocky Mountain region. It is also common in low-elevation coastal marshes and bogs near the Pacific Ocean.

Eremobina claudens is found in the western parts of our area from southwestern British Columbia to southern Oregon. The range extends east through northern Washington and British Columbia. It has also been collected in the Rocky Mountains in northern Idaho and western Montana, extending to the Blue Mountains of northeastern Oregon.

This species occurs in the boreal forest biome throughout most of northern North America from northern British Columbia to Newfoundland. The range barely enters the northern United States in the Great Lakes region and New England. The range extends south to northern parts of New Mexico and Arizona in the Rocky Mountains and to the Central Coast of California along the Pacific.

This species is a foodplant specialist that feeds on sedges (Carex spp.) in the Cyperaceae.

The flight period of E. claudens is summer and early fall. It has been collected from late June until early September in the Northwest. This species is nocturnal and comes to lights.