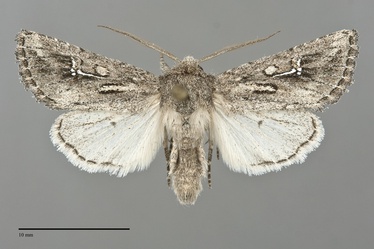 Tricholita chipeta is a small, light gray-tan moth (FW length 14 mm) that flies in southern Idaho in our region. It has a white reniform spot that is elongated toward the forewing base at its inferior end. The forewing ground color is slightly darker gray in the distal cell surrounding the reniform spot to the outer margin. The veins are gray. The transverse lines are absent, except near the forewing margin. The subterminal line is evident as a dark shade, and the terminal line is dark and thin. The fringe is weakly checkered tan and gray. The orbicular and claviform spots are black and filled with the ground color. The former is a small oval, and the latter is moderate-sized. The reniform spot is gray filled with white, upright and bar-like with a spike-like extension toward the wing base along the cubital vein to the orbicular spot. The hindwing is medium-dark brown gray, slightly darker toward the margin, with a two-toned gray and whitish fringe. The head and thorax are similar to the forewing in color. The male antenna is mildly bipectinate.

This species can be identified by its tan wing and characteristically shaped white reniform spot.

Tricholita chipeta has been found in open juniper forest in southern Idaho.

This moth has only been found in our area. It was collected along the south slope of the Black Pine Mountains in southeastern Idaho near the border with Utah.

This species is found from southern California to west Texas across the Southwest. The range extends north to southern Idaho and Colorado.

The foodplant is reported to be Gutierrezia wrightii in the Asteraceae (Powell & Opler 2009).

This species flies in the late summer. The Pacific Northwest specimens were collected in late August.