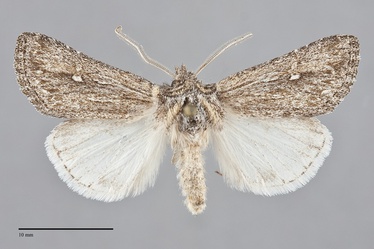 Eucoptocnemis canescens is a hoary, gray-brown, medium-sized moth (FW length 15 - 18 mm, longer and broader in males than in females) that is found in desert in southeastern Oregon during September. It has a white-filled reniform spot and a bipectinate male antenna. The forewing is a mixture of pale gray and light brown scales, producing a slightly streaky hoary appearance with barely perceptible lines. The wing is darkest distal to the lower reniform spot. A series of faint darker wedges precede the subterminal line. The forewing fringe is weakly checkered. The light-gray filled orbicular spot is very elongated, nearly touching the reniform. The reniform spot is evident as white filling and is mesially constricted. The claviform spot is absent or represented by a few black scales. The hindwing is white with a sprinkling of dark scales along the costa and outer margin and a thin terminal line along the anterior fringe. The thorax is hoary gray with light brown along the edges of the tegulae. The frons has a raised central tubercle. The male antenna is bipectinate, 3.5 - 4X as wide as the shaft.

Males of this species can be recognized by the hoary, silver-gray forewing with an elongate orbicular spot and a bipectinate antenna. Females are rarely collected. They can be identified by the forewing color and the short and narrow forewing shape. Tricholita chipeta, a moth that occurs in deserts of southeastern Idaho in our region, has a white-filled reniform spot that bears some resemblance to that of E. canescens. It is a smoother tan moth, and the lower spot extends much further toward the base than in E. canescens. Its hindwing is much darker than that of E. canescens.

This species is found in steppe habitats in the Great Basin and  the Mojave Desert of southern California.  The habitat in southeastern Oregon is either sage steppe or greasewood flats based on the exact locality north of Frenchglen, Harney County, where D. F. Hardwick collected a series during the 1960's.

Eucoptocnemis canescens has only been found in southeastern Oregon and southern Idaho in our region.

This species reaches its northern limit in our area. It is more widely distributed in Nevada and southern California.

Adults are found in late fall, flying in mid September in our region. Most of the type series were collected during a short span of dates during the middle of the month suggesting that the flight season is very short. Females are narrow-winged and have been collected rarely.  Lafontaine (2004) suspects that they might be flightless. Males are nocturnal and come to lights.