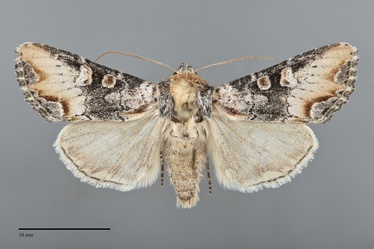 Admetovis icarus is a rarely-encountered medium-size noctuid moth (FW length 17–21 mm) with a mottled lead gray forewing with a characteristic flame-shaped mark on the distal wing that flies in montane forest during mid-summer. Most of the forewing is mottled lead gray, lightest at the base, but the medial area distal to the reniform spot and the subterminal area are contrasting whitish and light tan. This contrasting distal area darkens gradually from nearly white to tan and is accentuated distally by the dark reddish brown subterminal line. This line is prominently toothed on the mid wing ("W-mark") and convex posterior to this mark. Together, the white to tan area and subterminal line form the flame appearance that is typical of the genus. The other forewing lines are less conspicuous, dark and light gray. The orbicular spot is round with a dark center ("ocellus"). The reniform spot is relatively inconspicuous because its pale filling is the same color as the medial area distal to it. The fringe is scalloped, mottled gray and tan. The hindwing is brownish gray with darker veins and discal spot, and has a smooth convex outer margin. The head and most of the thorax are red brown, whereas most of the tegulae are gray.

Admetovis icarus is the least-commonly found Admetovis in the Pacific Northwest. It is closely similar to Admetovis oxymorus in size, color, and pattern. The best character for distinguishing these species without genitalia dissection is the shape of the hindwing margin: that of A. icarus is convex whereas that of A. oxymorus has a slight but consistent concave segment (between veins M1 and M3). Admetovis icarus tends to have darker and more mottled forewing than A. oxymorus, the hindwing is also darker brownish gray, and the orbicular spot of A. icarus is a more prominent component of the forewing pattern, usually with a dark ocellus that A. oxymorus lacks. Admetovis icarus is almost always found at high elevations but can be sympatric with A. oxymorus; however, an individual found near the lower limit of trees or in steppe is almost certainly A. oxymorus. Admetovis similaris is most easily distinguished from A. icarus by its white rather than gray hindwing.

Admetovis icarus flies in mountain forests from middle elevations to near timberline.

Admetovis icarus is rarely encountered in our area. It has been found in the central and northern Cascade range in Washington (as far south as Lake Kachess near Snoqualmie Pass), mountains of south-central and south-east British Columbia, the Wallowa Range of northeastern Oregon, and in the Rocky Mountains of eastern Idaho.

This species occurs in the mountains of Colorado and Utah outside of the Pacific Northwest. It is the only Admetovis in this portion of its range, east of the known distribution of A. oxymorus.

The early stages of A. icarus are unknown. It might feed externally on woody shrubs like those of A. oxymorus.

Adults are on the wing during mid-summer, with Pacific Northwest records from July and August. They are nocturnal and come to lights.

Crabo LG, Schmidt BC. 2018. Review of Admetovis (Grote) with the description of a new species from western North America (Lepidoptera, Noctuidae, Hadenini). ZooKeys 788: 167-181.