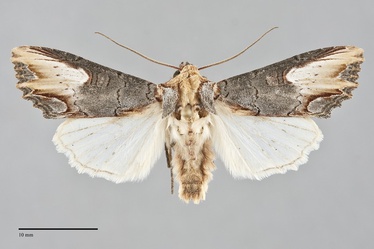 Admetovis similaris is the smoothest and lightest (FW length: 18-20 mm) of three similar moderate to large noctuid species that fly in spring and early summer east of the Cascade crest. These three similar species all have gray forewings with flame-like light ochre and white fields distal to the reniform spot. The forewing ground is even lead gray, including the terminal area. A prominent pale mark on the distal wing is formed by white in the lateral reniform and adjacent medial area which blends with light ochre-brown in the subterminal area. The thin pale subterminal line extends to the outer margin at the apex and forms a strong W-mark to the margin on veins M3 and CuA1. The radial veins and a shade medial to the subterminal line are dark red-brown. The shade is strongest from vein CuA1 to the trailing margin. The basal, antemedial, and the portion of the postmedial line that is not interrupted by the pale patch are lines are gray and relatively inconspicuous. The orbicular spot is dark and light gray with filling of the gray ground color. The medial reniform spot is gray with a red-brown inner component; the lateral part of the spot is obscured by the pale patch. The claviform spot is absent. The hindwing is nearly white with light gray veins and terminal line. The head and central thorax are tan, while the tegulae are gray with brown medial margins. The male antenna is bead-like.

This species resembles both other Admetovis species, but is only likely to be confused with Admetovis oxymorus, with which it occurs. These species are best distinguished by the colors of their hindwings. That of A. similaris is pure white, while those of the others are light brown or gray. Admetovis similaris flies slightly earlier in the season at sites where it and A. oxymorus occur together and is more likely to be found in open steppe habitats.

This species is widely distributed throughout much of western North America in dry climates.  In the Pacific Northwest, it is narrowly restricted to riparian zones along creeks and canyonlands at middle to low elevations east of the Cascades in relatively dry environments.

Admetovis similaris is found in the dry interior regions of the Pacific Northwest south of southern British Columbia. It is most common in the ecotone between steppe and forest and is uncommon in the central portion of the Columbia Basin in Washington. This species does not occur west of the Coast Range and Cascade Mountains. Its range enters western Idaho in the Columbia Plateau ecoregion.

The range of this species extends south to southern California and Arizona. It probably occurs in adjacent Mexico as well.

No information is presently available regarding larval foodplants of this species, but it is probably a specialist feeding on elderberries (Sambucus spp.) in the Caprifoliaceae based upon closely related species.

Adults fly in the spring and early summer, earlier at low elevations and later at higher altitudes. Records from the Pacific Northwest span mid-April to early August, but are most common in May and June.