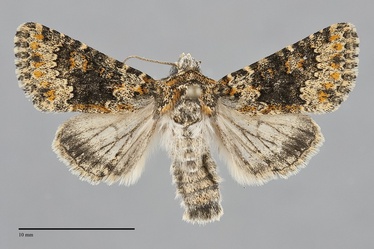 Hecatera dysodea is a recently introduced Eurasian noctuid moth that is spreading in western Oregon and Washington and the dry interior.  It is a small to medium species (FW length 12–14 mm) with an attractive pattern of dark gray on its median area and mottled yellow and orange base on its terminal areas. The ground color of the forewing is powdery yellow to light green due to a mixture of light yellow and dark gray scales. Bright orange markings are present at the base and as a series of spots representing the subterminal line. The wing base, median area, and margin opposite the cell and in the fold are darker greenish-gray. The lines are double with the components abutting the median area strong and the opposite component nearly absent, gray, and filled with light yellow. The basal and antemedial lines are slightly irregular; portions of the antemedial line are black in some specimens. The postmedial line is evenly scalloped between the veins, smoothly convex toward the outer margin around the reniform spot and then perpendicular to the trailing margin. The orbicular and reniform spots are black with partial orange inner components. The orbicular spot is filled with the dark surrounding color while most of the reniform spot is filled with the lighter color of the distal wing. A small claviform spot is present. The hindwing is putty-white with dark gray on the distal third, dark veins, and a lighter gray discal spot. A postmedial line is evident on the veins. The hindwing fringe is pale. The head and thorax are mottled light yellow, gray, and orange with a faint dark transverse bar across the distal collar. The eye is covered with fine hairs.

This species can usually be identified by the rich, orange markings on the forewing. It is most similar to Pseudobryomima muscosa, a similar-sized mottled green species that flies in forested habitats in our region, and Lacinipolia strigicollis, an abundant species that occurs in a variety of habitats. Hecatera dysodea can be told from P. muscosa by the orange color, darker medial area, and lighter two-toned hindwing, all lacking in P. muscosa. In addition, P. muscosa does not have hairy eyes. Lacinipolia strigicollis is similar in size and general pattern, but lacks the strong yellow and orange colors of H. dysodea and has a whiter hindwing with less gray at the margin.

This species is native to Eurasia where it is widely distributed. It has spread to central California and the Rocky Mountain region as far east as western Nebraska outside of our region (Moth Photographers Group (September, 2022)).

The adults appear to be multiple-brooded in the Northwest and have been found from early May to mid-September. They are nocturnal and come to lights, but have also been found in traps baited with floral-scented lures.

This species has the potential to become a pest in commercial lettuce seed crops.