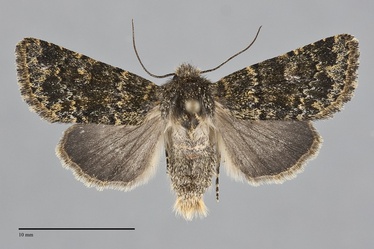 Pseudobryomima muscosa is a small moth (FW length 12–14 mm) that flies west of the Cascades and Coast Ranges during the summer. It has a mossy greenish-gray forewing. The forewing has a long apex and is powdery mottled gray-green, lighter yellow-green in some Willamette Valley populations. The base and terminal area are slightly lighter than the rest of the wing, and the distal subterminal area is usually slightly darker. The lines are blackish gray and powdery yellow-green. The antemedial line is evenly zigzagged and is oriented perpendicular to the posterior margin. The median line is blackish gray, diffuse. The postmedial line is evenly toothed on the veins, drawn sharply toward the base on the costa and nearly straight elsewhere at a strong oblique angle toward the base. The subterminal line is powdery yellow-gray, irregular with teeth toward the base opposite the cell and in the fold. The terminal line is a series of dark triangles between veins. The fringe is powdery checkered gray and yellow. The orbicular spot is a very small circle or absent, dark rimmed with pale greenish filling. The reniform spot is outlined in dark and filled with peripheral whitish gray spots and a diffuse dark central crescent of the ground color. The claviform spot is absent. The hindwing is medium-dark gray, darker toward the margin, with dark veins and terminal line. The hindwing fringe is two-toned gray. The head and thorax are powdery dark greenish gray. The male antenna is beaded.

This moth can be identified by its small size and mottled dark moss-green color. It is most likely to be confused with Viridiseptis marina, found only in southwestern Oregon in our area. It is mottled lighter yellow-green and dark gray than P. muscosa and has dark gray in the terminal area opposite the cell. This area is lighter than the rest of the wing in P. muscosa. Lacinipolia comis and Lacinipolia rectilinea are mottled green and dark gray in part of their range. This species have more sharply-defined lines and have light and dark marks at the posterior subterminal area that are lacking in P. muscosa.

The range of this species includes northern and central California.

No information is presently available regarding larval foodplants of this species, but it may be a foodplant specialist feeding on ferns (Polypodiaceae) based on closely related species.  Based on the habitat, it may prefer rock ferns in genera such as Cryptogramma and Pellaea, and perhaps epiphytic ferns of the genus Polypodium in coastal rainforests.

The flight period of P. muscosa is long, lasting from May to late September. Most specimens have been collected during July and August in the Northwest. It is nocturnal and comes to lights.