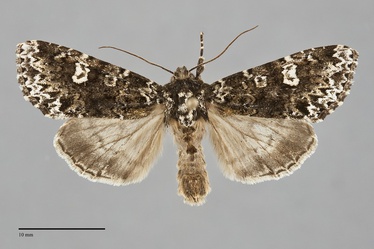 Melanchra adjuncta is a common, black and white, medium-sized noctuid moth (FW length 16 - 18 mm) that flies in forests throughout the Pacific Northwest. It has broadly white-rimmed orbicular and reniform spots and zig-zag lines on the terminal forewing. The forewing is powdery charcoal gray with a brownish olive cast, usually with lighter dark olive areas to light gray in the subterminal area and sometimes along the costa, and whitish gray medial to the basal line. Some specimens have more white mottling surrounding the subterminal line, including in the terminal area. The fringe is checkered white to dark gray and charcoal. The basal line is black, double, filled with white. The antemedial and postmedial lines are black and double, but usually less conspicuous than the basal line and sometimes partially or absent except on the costa. The antemedial line is usually filled with dark olive to white, palest near the costa. The postmedial line is scalloped, filled with pale at the costa, darker gray near the cell, and dark olive below the reniform spot. The subterminal line is zig-zag, white, and preceded by a black mark at the costa and a series of black chevrons on the mid-wing and near the trailing margin. The terminal line is a series of black triangles. The orbicular and reniform spots have a black outline and are filled with pale gray to white, paler and more extensively in the reniform spot, with dark gray central filling in both spots. The claviform spot is black, small, and indistinct against the dark background. The hindwing is slightly brownish light gray with darker gray veins, discal spot, wavy postmedial line, and marginal band. The fringe is lighter gray, usually with an inner dark line and separated from the rest of the wing by a dark gray terminal line. The head and thorax are slightly darker than the forewing, often with white or light gray frosting on the central thorax and the central tegulae. The eye is covered with fine hairs. The male antenna is bead-like.

An unusual form of this species is entirely olive-brown with olive-tan light areas, including in the reniform. It can usually be identified by the similar pattern as the typical form.

This species is widely distributed in moist forests throughout much of North America.  In the Pacific Northwest, it is relatively uncommon in mixed hardwood-conifer forests and ponderosa pine forests of the Rocky Mountain region and along the east slope of the Cascades at middle elevations.  However, it is moderately common in coastal rainforests and mixed hardwood-conifer forests along the west slope of the Cascades at low to middle elevations.

Melanchra adjuncta occurs in forests from southern British Columbia south throughout our region, including west of the Coast and Cascade Ranges. It is absent from dry steppe habitats.

This species has a wide range in North America. In the East it ranges from Nova Scotia and Manitoba to North Carolina and Nebraska. The range extends south to Utah in the Intermountain Region. It is not listed as occurring in California in McCabe (1980).

This species is a very broad generalist feeding on many kinds of herbs and hardwoods in the families Ranunculaceae, Rosaceae, Asteraceae, Grossulariaceae, Caprifoliaceae, Salicaceae, Betulaceae, and Fabaceae.

Adults of M. adjuncta usually fly in early summer and have been collected from early May to early August in our region. They are nocturnal and come to light.