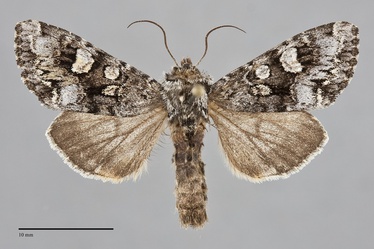 Papestra biren is an introduced, moderately large (FW length 15 - 17 mm) dark gray moth that is expected to occur in northern British Columbia. It has an even gray subterminal area and pale, gray-filled spots. The forewing is slightly dark gray without a brown tint, slightly lighter gray in the basal area. The subterminal area except the costa is smooth pale gray to blue-gray, with similar mottling in the terminal area. Black veins are present between the reniform spot and the postmedial line, and a thick horizontal black line connects the claviform spot to the postmedial line. Several of the veins on the mid-forewing are black distal to the postmedial line, most prominent in the terminal area. The basal and antemedial lines are dark gray, double filled with light gray. The antemedial line is slightly irregular, slightly excurved and slanted toward the anal angle from the costa. The median line is smoky black, usually faint but complete. The postmedial line is gray, double, with black medial component below the cell, filled with light gray on the costa and below the cell and the ground color opposite the reniform spot, toothed on the veins, sharply drawn toward the base on the costa, excurved around the reniform spot, and mildly to strongly slanted toward the base below the spot. The subterminal line is whitish gray, irregular, offset toward the base below the costa and forming a moderately-strong "W" mark on veins M3 and CuA1. It is preceded by black wedges at the "W" and in the fold. The terminal line is a series of dark gray to black triangles. The fringe is gray with white checkering of the edge. The spots are outlined in black and are large. The orbicular spot is round to ovoid, filled with light gray without a prominent ocellus. The reniform spot is broadly kidney-shaped and filled with similar or paler gray. The claviform spot is thick and black, also filled with pale gray. The hindwing is gray with darker margin with lighter spots near the anal angle, veins, and discal spot. The hindwing fringe is whitish-gray with a gray base. The head and thorax are blue-gray to gray, with a transverse black line across the mid-collar. The eye is covered with fine hairs. The male antenna is bead-like.

The habitat of P. biren is boreal spruce-fir forest.

This species has been recorded for British Columbia, but we have not examined any specimens from the province nor located a confirmed reference. However, it occurs in adjacent Alberta, and is likely to spread to the northern part of the province if it has not already done so.

This species is originally Eurasian and was accidentally introduced into Newfoundland. According to McCabe (1980) it spread westward through Canada, with the first confirmed Alberta record in 1958. McCabe anticipated that the species would continue to spread to establish a range similar to that of Papestra quadrata, which occurs south in the mountains and north to Alaska.

This species is apparently a generalist feeding on many hardwoods and some conifers.  Records include willows (Salix spp.) in the Salicaceae, alders (Alnus spp.) in the Betulaceae, Myrica spp. in the Myricaceae, and larch (Larix spp.) in the Pinaceae.

The flight period of this species is similar to other Papestra species, usually early summer in June and July. There are no confirmed records of this species for British Columbia or other parts of the Northwest. It is nocturnal and comes to lights.