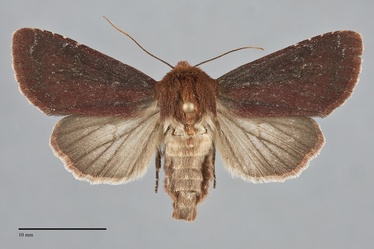 Sideridis maryx is a medium-sized noctuid moth (FW length 17 - 20 mm)that flies in forests with bear-berry (Arctostaphylos uva-ursi) in early summer. It has uniform, dark maroon forewings lacking almost any pattern. The forewings are darkest at the costal margin, in the cell, and along the veins. The transverse lines are represented by pale dots at the costa. Only the reniform spot is faintly visible as a darker gray mark with a few white spots in some specimens. The hindwing is pale yellowish-gray with smoky gray toward the margin and dark veins. The discal spot is barely evident. The eye is covered with fine hairs. The male antenna is bead-like.

This species is widely distributed across Canada in moist forest habitats.  In the Pacific Northwest, it occurs in moist, open forest and meadow habitats at higher elevations in the Rocky Mountain region, and on barren rocky ridges or lava fields at high elevations along the summit of the Cascades and Siskiyou Mountains.  It is usually uncommon or rare, but may be locally common where kinnikinnick brush is found.

Sideridis maryx is found in forests in the northern and western parts of the Pacific Northwest. It occurs across southern British Columbia and in the adjacent northern parts of Washington and Idaho south to the Blue Mountains. It is also found west of the Cascade Mountains from the San Juan Islands, the southern Puget Trough, and western Oregon south to the Siskiyou Mountains.

The range of this species extends to the East Coast across southern Canada and the northern United States. It occurs from the island of Newfoundland south to New Jersey and Pennsylvania in the East. The Pacific Northwest appears to be the southern limit of this species in the Rocky Mountains and along the West Coast.

No information is presently available regarding larval foodplants of this species, but it is strongly suspected to be a specialist feeding on bearberry, also called kinnikinnick, (Arctostaphylos uva-ursi) in the Ericaceae based upon the habitat association.

This species is single-brooded and flies in late spring and early summer. Our records span mid-May to mid-July, with the later records being from higher elevations than the early ones. It is nocturnal and comes to lights.