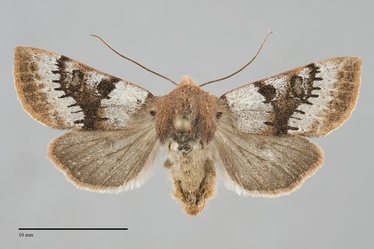 Orthosia pulchella is, as the meaning of the species name suggests, an attractive moth that flies in spring and early summer. It is medium-sized (FW length 15 - 16 mm) with a highly-variable forewing with silvery blue-gray and chestnut-brown color. The apex is pointed, the costa is slightly anteriorly convex, and the outer margin is smoothly convex to produce a elegant pointed shape to the wing. Most males in our area have a pattern of brown basal and median areas with blue-gray along the costa and on the entire wing distal to the strongly toothed postmedial line. However, the brown areas often extends to the subterminal line, is present distal to the postmedial line in the terminal area or medial to the subterminal line, or is absent all together, and in some the entire basal area is gray. Some males and most females are entirely brown ranging from bright red-brown with dark-filled spots (uncommon) to chestnut brown. Most females are uniform chestnut brown with barely evident markings. The basal and antemedial lines are barely darker than the ground color. The dark median line is usually not prominent except in some red morphs. The postmedial line is drawn to sharp points on the veins, very evident in specimens with a large contrast between the color of the median and subterminal areas, and is followed by paired dark spots on the veins that is the most evident feature of the line in many individuals. The pale subterminal line is evident in light brown specimens, but the position of the line is clearly demarcated by changes in the preceding and following areas in many. The orbicular and reniform spots are faint, fairly large, and are as variable in color as the rest of the wing varying from the brown ground color, darker brown, or blue-gray in specimens with extensive gray color. They are mostly filled with the dark brown color and are barely evident in dark brown females. The hindwing is dark gray, lighter at the base, with dark veins and discal spot and gray to pink hindwing fringe. The color of the thorax is variable, often brown or red-brown but are blue-gray with a slightly reddish color in many specimens with extensive gray on the forewing. The thorax is smooth without a median crest or tuft. The eye is covered with fine hairs. The male antenna is strongly bipectinate and that of the female is biserrate.

This species can usually be identified readily despite its variability since few spring-flying moths are blue-gray. Predominantly brown specimens can be confused with Orthosia transparens, a common brighter red-brown moth, but are usually darker brown or have dark-filled forewing spots. In O. transparens only the lower half of the reniform spot is dark. Males of these species are most easily differentiated by the width of the antennae. Those of O. transparens are much narrower and appear thick but not feathery to the naked eye. In addition to the color differences described above females of O. pulchella lack a median ridge and tuft on the thorax that are present in O. transparens and its antenna is biserrate, wider than the filiform antenna of O. transparens.

Larva is smooth, mottled cream, pink, and tan with a prominent black prothoracic shield.  It is illustrated by Miller & Hammond (2003).

This species is common to abundant in dry forests and brushlands along the West Coast.  In the Pacific Northwest, it is common in mixed hardwood-conifer forests or brushlands with manzanita in the Siskiyou region and thoughout the Cascades at low, middle, and high elevations, and is particularly abundant in dry, open ponderosa pine forests along the east slope of the Cascades.  It is also frequent in the Blue Mountains of the Rocky Mountain region in mixed hardwood-conifer forests at higher elevations.

Orthosia pulchella is found in forests throughout the western portion of the Pacific Northwest as far north as southern British Columbia. The range extends east in the southern part of the province, extending as far as the Idaho Panhandle.

The range of O. pulchella extends south through California to near the border with Mexico. It occurs in the Sierra Nevada as well as along the Pacific Coast.

Orthosia pulchella flies in the early spring. The flight begins in late March and lasts until early June. This species is nocturnal and comes to lights.