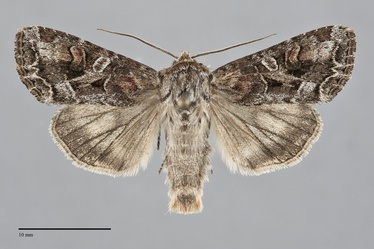 Trichordestra liquida is a common and widespread, blue-gray, medium-sized moth (FW length 15–18 mm) with a very busy pattern of pale lines and spots, including red-brown and white markings, a streaky pattern, and a pale subterminal line that forms a W-mark at the margin that is widely distributed in forests and flies during late spring and early summer. The ground color is mottled gray-brown and tan, often lost under extensive light blue-gray suffusion on the posterior wing and filling the subterminal area and apical terminal area. The cubital and proximal CuA2 vein are similar pale color, sometimes lighter that is often accentuated by dark gray to black in a triangular region between CuA2, the cubital vein, and the postmedial line. Most specimens have less contrasting gray on other veins in the median. The cell on both sides of the orbicular spot is dark gray. The median area distal to the reniform spot is red-brown, and a few specimens demonstrate weak red-brown mottling on other parts of the wing. The basal, antemedial, and postmedial lines are gray, double filled with light blue-gray, less often gray. The basal and antemedial lines are irregular. The latter is weakly excurved and slightly slanted toward the anal angle from the costa. The median line is a sooty shade, evident near the costa. The postmedial line is weakly scalloped, sharply displaced toward the base on the costa and nearly straight elsewhere with a bend towards the base on M3. The subterminal line is pale blue-gray near the apex and whitish gray to ochre below an offset near the apex. It forms a moderate W-mark on M3 and CuA1 and is slightly concave toward the base above and below this mark. A preceding shade located on the mid- and posterior forewing is gray to black, forming spots or wedges near the "W" in some individuals. The terminal line is a series of gray spots. The fringe is dark gray with faint longitudinal stripes and light transverse lines at the tips of the veins. The spots are outlined in black and are moderately sized. The orbicular spot is round to ovoid, usually upright, filled with light whitish or bluish gray peripherally and darker gray to brown centrally. The reniform spot is kidney-shaped, slightly tilted with the anterior portion lateral, filled with blue-gray peripherally, red-brown centrally, and gray inferiorly. The claviform spot is dark and usually apically pointed. The hindwing is light brown-gray with a brassy sheen, with an incomplete gray marginal band, gray veins, and discal spot. The hindwing fringe is tan off-white with a gray base. The head and thorax are slightly bluish-gray with transverse lines across the collar. The eye is covered with fine hairs. The male antenna is filiform.

This species can be recognized in most of our region by its light blue-gray pattern, including on the veins. It is most likely to be confused with Trichordestra tacoma and the streaked form of Trichordestra lilacina, both widespread species in our region. Populations from eastern British Columbia could also be confused with Trichordestra dodii. Trichordestra liquida can be told from T. tacoma by the absence extensive red-brown on the forewing and streakier blue-gray band in the subterminal area. Trichordestra lilacina is a variable species, but all forms have a narrow strongly oblique orbicular spot that differs from the round or ovoid upright spot of T. liquida. Trichordestra dodii is more warmly brown or yellow tinted than T. liquida and has a much less prominent "W" mark of the subterminal line. Structurally, males of T. dodii lack coremata (pheromone-emitting hair pencils) on the ventral abdomen which are present in T. liquida.

This species is geographically variable. The populations from the western part of the Pacific Northwest are more vividly colored than those from east of the Cascade crest.

Trichordestra legitima, an eastern North American species that barely enters eastern Alberta (Pohl et al. 2010) is recorded from Vernon, British Columbia by Jones (1951). It resembles T. liquida but is even blue-gray on most of the forewing without pale veins, and lacks contrasting pale filling of the orbicular spot or a pale subterminal line. This record is almost certainly a misidentification of T. liquida.

The type locality of Mamestra liquida Grote is Washington Territory.

This species is common and widely distributed in moist forests throughout much of western North America.  In the Pacific Northwest, it is particularly common in coastal rainforests, mixed hardwood forests, and riparian zones along creeks and rivers at low elevations west of the Cascades.  It is also common in mixed hardwood-conifer forests at higher elevations in the Cascades and Rocky Mountain regions, and in ponderosa pine forests at middle elevations east of the Cascades.

Trichordestra liquida is found in forests throughout our region, including west of the Coast Range and Cascade Mountains. Records extend as far north as the southern Alaska Panhandle in adjacent west-central British Columbia. It does not occur in the arid interior basins.

The Pacific Northwest represents the majority of the distribution of this species. It also occurs in the adjacent Rocky Mountains from southwestern Alberta to Utah and Colorado, and in northeastern California. An apparently disjunct population is present in the Black Hills of South Dakota (McCabe 1908).

This species appears to be a very broad generalist feeding on many kinds of herbaceous vegetation such as asters (Aster spp.) in the Asteraceae, grasses (Poaceae), and various hardwoods such as alders (Alnus spp.) in the Betulaceae.

Trichordestra liquida is single brooded and flies from late spring to mid-summer. Our records extend from mid-May to August, with the majority being from June. It is nocturnal and comes readily to lights.