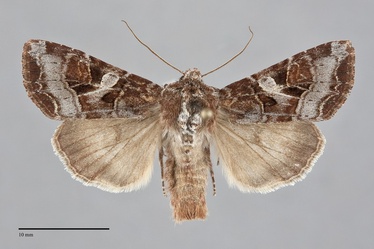 Trichordestra tacoma is a colorful red-brown and blue-gray medium-sized noctuid moth (FW length 16–17 mm) that flies in forests throughout the Pacific Northwest in early summer. It has a large, gray orbicular spot. The forewing is red-brown, with blue-gray shading in the posterior basal and median areas. The subterminal area, other than the costa and the apical terminal area, is even light blue. The cell adjacent to the orbicular spot is darker gray-brown than the rest of the wing. A dark gray to black spot is present below the reniform spot, bordered by the cubital vein and M3 superiorly, CuA2 inferiorly, and the postmedial line laterally. A pale gray spot in the mid-median area abuts the lower orbicular spot and is accentuated by lighter gray on CuA2, which runs through this patch. The basal and antemedial lines are dark red-brown, darkest adjacent to the median area, filled with blue-gray, less often tan. The basal line is irregular. The antemedial line is slightly irregular and mildly excurved to straight, oriented at a slant toward the anal angle. The median line is dark red-brown and faint, usually evident on the costa and sometimes on the posterior wing. The postmedial line is red-brown, gray, and black, darkest abutting the median area below the cell, double-filled with blue-gray, mildly scalloped, sharply drawn to the base on the costa, straight lateral to the reniform spot, and angled toward the base below the spot. The subterminal line is blue-gray at the apex, pale yellow-tan below an offset near the apex. It forms a weak W-mark on veins M3 and CuA1 and is concave toward the base above and below this mark. It is preceded by an even dark brown to gray shade that fades near both margins. The terminal line is thin and dark red-brown. The fringe is red-brown. The forewing spots are outlined in black. The orbicular spot is large, round, or oval, filled with even light gray, and sometimes with weak gray central filling. The reniform spot is large but often incomplete, kidney- or hourglass-shaped, often with a complete or partial inner yellow line and central filling of red-brown, and a small gray spot at the lower end. The claviform spot is small to moderate, thicker than the other spots, and filled with the ground color. The hindwing is yellowish gray-brown with a brassy sheen, darker gray toward the margin, with gray veins and discal spot. The hindwing fringe is white with a yellow and gray base. The head and thorax are covered with a mixture of red-brown and blue gray scales, organized into bands on the collar, with weak tufts on the anterior thorax. The eye is covered with fine hairs. The male antenna is filiform.

This species can be recognized by the broad, smooth blue-gray band across the distal forewing, red-brown ground color and reniform spot, and large gray-filled orbicular spot. Several similar species, including Lacanobia grandis, Trichordestra liquida, and Trichordestra lilacina, lack this combination of features. Lacanobia grandis has a black basal dash that T. tacoma lacks.

The type locality of Mamestra tacoma (Strecker) is Seattle, Washington.

This species is widely distributed in moist forests across Canada and throughout the mountains of western North America.  In the Pacific Northwest, it is common in coastal rainforests and mixed hardwood forests at low elevations west of the Cascades, and in mixed hardwood-conifer forests or spruce-fir forests at middle to high elevations in the Cascades and Rocky Mountain regions.  It also occurs in ponderosa pine forests east of the Cascades, but is usually uncommon in this habitat.

Trichordestra tacoma is found in conifer forests throughout our region except in the mountains of the Basin and Range province of southern Oregon and Idaho. It occurs on both sides of the Coast Range and Cascade Mountains.

The range of T. tacoma extends across southern Canada and the northern United States to Newfoundland, New England, and New York along the Atlantic Coast. The range extends south to North Dakota in the Great Plains and Colorado in the Rocky Mountains. It is also listed as occurring in California in McCabe (1980).

This species appears to be a generalist feeding mostly on hardwoods in the families Rosaceae, Ericaceae, Betulaceae, and Salicaceae.  It particularly feeds on huckleberries (Vaccinium spp.), cherries (Prunus spp.), birches (Betula spp.), and willows (Salix spp.)

Trichordestra tacoma is single-brooded with adults on the wing during the late spring and summer months. Records are from early May through July, with most of the later records coming from higher elevations. It is nocturnal and comes to lights.