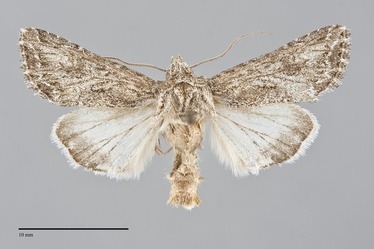 Trudestra hadeniformis is a medium-sized (FW length 15 - 16 mm), non-descript, light gray moth that flies in southeastern Oregon in late spring. It has a thin, white, subterminal line that forms a W-mark near the outer margin. The forewing is mottled light gray, slightly lighter in the fold and distal to the reniform spot, and darker on the distal wing, particularly preceding the subterminal line and in most of the terminal area except at the apex. The veins are dark gray on the distal wing. The basal, antemedial, and postmedial lines are gray, thin, double filled with the ground color. The basal and antemedial lines are evident as paired dark spots on the costa and are faint elsewhere. The antemedial line is irregular and slightly angled from the costa toward the anal angle. The postmedial line is moderately scalloped with thin dark lines on the veins at the tips of the teeth, drawn toward the base at the costa, nearly straight across the wing near the reniform spot, and then slightly angled toward the base to the posterior margin. The subterminal line is white, irregular, offset toward the outer margin on vein R5, forming a moderate W-mark on M3 and CuA1, and bent toward the anal angle between CuA2 and 1A+2A. It is preceded by dark brownish gray on most of the mid-wing. The terminal line consists of gray triangles between veins. The fringe is checkered light gray and gray. The orbicular spot is incomplete, thin gray, slightly oval, filled with lighter whitish gray than the ground and a very weak central ocellus. The reniform spot is similar, kidney-shaped, filled with the ground color and slightly darker gray posteriorly. The claviform spot is thin and black. The hindwing is pale whitish gray with a wide fairly well-demarcated dark gray marginal band and dark gray veins. The fringe is white with a yellow base. The head and thorax are similar to the ground color of the forewings with thin dark gray transverse line across the collar and lines near the edges of the tegulae. An irregular frontal tubercle is present. The eye is covered with fine hairs. The male antenna is bead-like.

This species can be identified by its mottled and slightly streaked light gray forewing with darker distal wing marked with a white subterminal line. The pattern is similar to Anarta trifolii, an abundant widespread species, but the color of this species is tan rather than gray. Anarta fulgora, a spring-flying species that also occurs in southeastern Oregon, is gray. It differs from T. hadeniformis by a larger and more prominent black claviform spot, darker gray in the lower reniform spot, and darker terminal area. It also has a short black basal dash that T. hadeniformis lacks.

This species likely belongs in the genus Anarta.

This species appears to be rare and barely enters the Pacific Northwest from the southern Great Basin in desert habitats at low elevations.  It has only been found in very dry sagebrush steppe in southeastern Oregon.

Trudestra hadeniformis has only been found once in southeastern Oregon in the foothills of the Pueblo Mountains near Denio, Nevada.

The range of this species is the desert Southwest and central Colorado. Only a few records are shown for Nevada, northeastern California, and Colorado on the Moth Photographers Group website.

This species has been found in late spring through the summer across its range. The Oregon record is from late May.