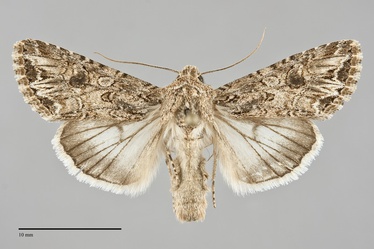 Anarta mutata is a mottled dull tan medium-sized moth (FW length 15 - 17 mm) that flies in dry habitats across the region during the summer. It has a busy forewing pattern that includes an oval orbicular spot, a large gray-filled reniform spot, and pale subterminal line with a strong W-mark, and an off-white and dark gray hindwing. The forewing is medium gray-tan mottled with gray, strongest on the costa in the subterminal area. The terminal area is darker gray except at the apex. A pale tan streak is often present in the subterminal area near the apex. The basal, antemedial, and postmedial lines are dark gray to black, double with filling of the ground color. The basal line is zigzag near the wing base, strongest on the costa and in the cell. The antemedial line is moderately irregular, slightly slanted toward the anal angle from the costa. The median line is faint gray, wide on the costa and thin and scalloped near the postmedial line below the reniform spot. The postmedial line is faint, weakly scalloped, drawn toward the base at the costa, straight lateral to the reniform spot, and then slanted toward the base posterior to the spot. The subterminal line is pale yellow-brown, irregular, offset toward the base below the apex, and forming a strong W-mark on M3 and CuA1 with the teeth touching the outer margin. This line is preceded by a series of long black chevrons on the mid-wing, occasionally with a gray to red-brown shade. A series of dark gray triangles between the veins forms the terminal line. The fringe is dark gray-tan, weakly to moderately checkered. The orbicular and reniform spots are outlined in thin black. The orbicular spot is an elongate oval, filled with whitish gray and a gray central ocellus. The reniform spot is large, kidney-shaped, filled with the ground color and a violet-gray smudge centrally or inferiorly. The claviform spot is usually small, black filled with gray. The hindwing is gray off-white with a slight sheen. A dark gray moderately well-defined marginal band is present, sometimes with a ling of the ground color at the outer margin near the anal angle. The veins, discal bar, and terminal line are thin dark gray. The hindwing fringe is white with a tan base. The head and thorax are powdery gray-tan with thin transverse lines on the collar and edges of the tegulae. The eye is covered with fine hairs. The male antenna is filiform. The frons is bulging. The male antenna is filiform.

This species is superficially similar to a number of species in the genus Anarta and closely related genera Trudestra and Tridepia. It is fairly uniform in appearance and can usually be recognized by its tan forewing with busy pattern and whitish hindwing with a dark gray marginal band. The most diagnostic feature is the elongate oval shape of the pale-filled orbicular spot. The orbicular spot of these other species is round. Sideridis fuscolutea has similar forewing color and an oval orbicular spot. The reniform spot of Sideridis fuscolutea is lined with white around the perimeter, rather than filled with tan and gray, as in A. mutata.

This species occurs on dry short-grass prairies of the Great Plains, and on dry sagebrush steppe west of the Rocky Mountains.  In the Pacific Northwest, it is rather uncommon in juniper woodlands and sagebrush steppe at middle to low elevations.

Anarta mutata is found in the dry interior regions of the Pacific Northwest, as far north as south-central British Columbia. It has been collected commonly throughout the Columbia Basin of Washington but also occurs in southeastern Oregon and southern Idaho.

This species is found in arid regions of the American West from central Alberta and southern Saskatchewan south to southern New Mexico, Arizona, and California.

Adults have a long flight season suggesting the presence of at least two broods in our region. It has been collected most commonly in May and June. This species is nocturnal and comes to lights.