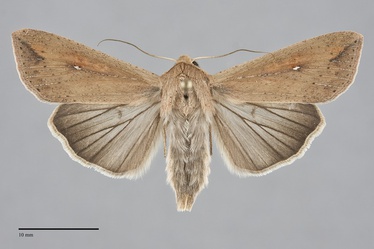 Mythimna unipuncta, the "armyworm," is a medium-sized moth (FW length 17 - 21 mm) that flies throughout our region to southern British Columbia throughout most of the year. It has tan forewings with reddish-orange in the cell, a white spot at the end of the cubital vein, and an oblique, gray line from the postmedial line to the apex. The forewing is speckled with dark gray scales. The red-orange in the cell extends distally to the gray line near the apex. This line is sharply demarcated anteriorly but blends to a triangular dark area posteriorly in many specimens. The terminal wing is shaded with gray in some specimens. The distal cubital vein is white, usually a small quadrate spot. Dark gray is present adjacent to the distal cubital vein and extends a short distance beyond the end of the cell and a small diffuse spot. The antemedial line is marked by gray dots on the veins in some specimens and is absent in others. The postmedial line is consistently marked with similar size gray spots on the veins, forming a smooth excurved arc on the anterior wing and an oblique linear array toward the wing base from the level of the lower cell to the trailing margin. A series of regular smaller gray dots forms the terminal line. The fringe is similar to the ground color, sometimes grayer or with a pink tinge. The pale outlines of the orbicular and reniform spots are visible in some individuals. The claviform spot is absent. The hindwing is smoky dark brown-gray with dark gray veins, thin discal spot, and thin terminal line. The fringe is cream with a yellow base. The head and basal half of the collar are light tan. The distal collar is darker, similar to the posterior thorax, separated from the light base by a gray transverse line. The eye is covered in fine hairs. The male antenna is bead-like, nearly filiform.

Adults of this species can be identified by the speckled tan color with orange-red in the cell, a small white spot on the distal cubital vein at the end of the cell, and the oblique gray mark on the distal wing which ends at the apex. This species is the least streaky of any member of the tribe Leucaniini.

Mythimna unipuncta is vagile and disperses widely through a variety of habitats at low to middle elevations. It is most common in agricultural settings on both sides of the Cascade Mountains, and is usually rare and sporadic in more natural habitats except for open ponderosa pine forests east of the Cascades.  This species is migratory and may not be a permanent resident in colder and wetter regions of the Pacific Northwest.

The North American range of this species includes most of Central America, the United States, and southern Canada from Coast to Coast. It ranges furthest north in Saskatchewan and Alberta, although vagrants are collected even further north from time to time. It also occurs in northern South America and western Eurasia.

This species is a foodplant specialist feeding on grasses (Poaceae), but is known to accept a wide range of other foods, including numerous herbaceous crops during epidemic outbreaks.

This species has been collected in low numbers during the spring, quite likely migrants from the south. It becomes more common during late summer and fall, peaking late in September and October.

This species is a widely recognized pest on a variety of crops, but particularly attacks grain crops of corn and wheat.  It is a major agricultural pest outside of the Pacific Northwest, but is usually less common in cool, wet climates. The larvae migrate after denuding whatever crop they have been feeding on, giving them their common name.