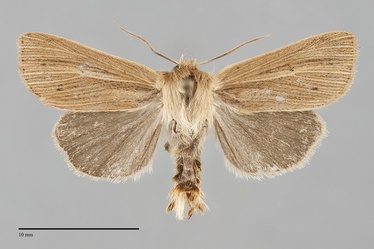 Mythimna yuconensis is a small (FW length 13 mm), longitudinally streaked, fawn-colored moth that flies in northern British Columbia in our region. Its hindwing is dark gray and its forewing veins are straw-colored, thickest and palest on the cubital vein. Each interspace contains two light and three dark lines, with the central gray line slightly darker and grayer than the others. The costa is pale, similar to the cubital vein. A small dark spot is present at the posterior end of the cell abutting the cubital vein near its terminal branches. The postmedial line is comprised of two small black spots, one at vein M1 and the other at CuA2. The terminal line is a series of tiny black dots between the veins. The fringe is fawn-colored. No other traces of the lines or spots are present. The hindwing is even dark gray. The hindwing fringe is light tan with a slightly darker base. The head and thorax are even slightly gray-tan, lacking transverse barring on the collar. Fine hairs cover the surface of the eyes. The male antenna is weakly biserrate.

This species is unlikely to be confused with other members of the tribe Leucaniini, due to its dark wing color and northerly distribution. It is similar to Hypocoena basistriga, a member of the tribe Apameini, with which it occurs in the far north. This species lacks hairs on the eyes, unlike Mythimna and other Leucaniini species. It has a different pattern of spots, lacking the pattern of two dots along the course of the postmedial line that is typical of M. yuconensis.

Mythimna yuconensis is similar M. oxygala and might prove to be a dark northern form of it.

The habitat of this species in Atlin, British Columbia is wetlands at low elevations.

This species is known from Atlin in far northern British Columbia.  It might be more widespread near the border with Yukon Territory.

As expected from the name, this species occurs in Yukon Territory.  It is also known from Alaska.

The larva of this species is unknown. It probably feeds on grasses (Poaceae) and sedges (Cyperaceae) based on the known preferences of related species and its habitat preference.