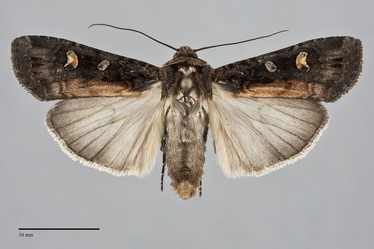 Actebia fennica, the Black Army Cutworm, is a distinctively colored, medium-sized moth (FW length 16–20 mm) with blackish-gray and warm, brown-orange forewings with light-colored spots. The forewings are narrow and appear long as a result. The forewings are dark purplish black, sometimes entirely so, but with contrasting, warm orange-brown along the trailing margin and between the postmedial and subterminal lines in many individuals. The transverse lines are black and double, but are relatively inconspicuous against the dark background. The basal and antemedial lines are prominently zig-zagged. The postmedial line is weakly scalloped and very gently convex toward the margin. The subterminal line is slightly irregular. It is preceded by a series of long black wedges, largest at the level of the posterior reniform spot. The spots are black. The orbicular spot is a short oblique oval filled with prominent pale gray scales. The reniform fairly large and kidney-shaped. It is filled with very prominent pale orange scales centrally and dark similar to the adjacent wing at its anterior and posterior ends. The claviform spot is long, thin, and black. The hindwing is pale smoky gray with darker marginal area, discal spot, and veins. The hindwing fringe is two-toned, dark proximally and light gray distally. The head and most of the thorax are similar to the dark forewing ground color. The distal collar is lightly barred brown and gray. The head lacks a raised tubercle. The male antenna is filiform.

This species can usually be identified by its elongate dark purplish gray and warm orange trailing margin and reniform spot. Entirely dark individuals that lack warm orange outside of the reniform spot resemble some Euxoa species, particularly dark forms of Euxoa perexcellens and Euxoa ochrogaster. Both of these species have pale scales in the subterminal and postmedial lines that A. fennica lack. Also, these Euxoa species have a raised frontal tubercle that is lacking on the head of Actebia species.

Larva is smooth, black with undulating white subdorsal and lateral bands.  It is illustrated by Lafontaine (2004).

This species is widely distributed in moist, boreal spruce-fir and hardwood forests across both Eurasia and Canada.

Actebia fennica has been most commonly found in central and southern British Columbia in our region. It is probably widespread in the northern part of the province as suggested by records from the Peace River region and Atlin. A few records of this moth are known for western Washington and the Blue Mountains of Washington and northeastern Oregon.

This species is found in the boreal zone across North America from Alaska and the Pacific Northwest across the continent to Labrador and New Jersey. It occurs as far south as southern Montana in the Cordillera and southern Minnesota and Michigan in the Midwest.

This species is a foodplant specialist feeding on huckleberries (Vaccinium spp.) in the Ericaceae, but during epidemic outbreaks, it will feed on all types of plants including conifers (Pinaceae).

Adults are single-brooded and fly during the summer. Records are from June to mid-September across North America, with Pacific Northwest records spanning mid-July to late September.

This species has been a major pest in agricultural crops of blueberries in northeastern North America, and will also defoliate conifers during epidemic outbreaks.