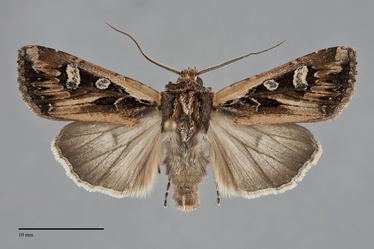 Euxoa perexcellens is a sexually dimorphic, colorful, relatively large and stout Euxoa (FW length 17–21 mm) with a pattern of light costa, streaks, and spots on a orange-brown background in males and some females and powdery silver-gray or black-brown in other females. It flies in a variety of habitats on both sides of the Cascade Range during late summer and fall. The ground color of the males is warm orange-brown, covered by brown to dark gray-brown on most of the median area, leaving a streak through the fold and the posterior margin pale. The same darker color is suffused between the dark veins in the subterminal area. The cell is dark brown to black, fading slightly lateral to the reniform spot. A black basal dash is very thick and extends to the antemedial line. A small black mark abuts the lower end of the reniform spot. The costa is bright ochre yellow, sometimes with an orange tint, that fades by the postmedial line, and the apex is similarly colored. The rest of the terminal area is dark gray. About half of the females are similarly colored and patterned, but the ground color is darker and redder, the color of the posterior margin and apex are light blue-gray, and the costa is cream. Various forms with increasing blue-gray suffusion exist, with increasing loss of the underlying pattern. A third form of the females is dark purplish black-brown. The basal line is present as spots on the costa in the blue-gray form of the females, but is otherwise absent. The antemedial line is reduced to a black and ochre arc at the base of the claviform spot. The median line is very faint gray on the posterior wing in the blue-gray form, absent otherwise. The postmedial line is thin and black, evenly scalloped, followed by a partial outer light yellow line in a few specimens, pulled toward the base on the costa, straight across the forewing lateral to the reniform spot, and straight at a 45° angle toward the base posterior to the level of the lower cell but fading near vein 1A+2A in most specimens. The subterminal line is light yellow, powdery, evident across most of the wing but not at the margins, irregular with an offset below the costa and a weak W-mark on M3 and CuA1. It is preceded by a dark red-brown or gray shade on the costa, the color depending on the color morph, and several long black chevrons between the veins on the mid-wing at and near the W-mark. The orbicular and reniform spots are outlined in black  and lined with light ochre, pale gray in the  blue-gray morphs. The orbicular spot is round or an elongate or tilted oval, small to moderate-sized, filled entirely with pale yellow in some streaked forms but usually with darker filling that is most extensive in the very dark females. The reniform spot is kidney-shaped, moderately large, often filled extensively with light yellow with dark gray at the lower end, but with more dark filling in the blue-gray or dark females. The claviform spot is diffuse black, more commonly solid black than filled with the ground color, appearing to continue the black dash lateral to the antemedial line. The hindwing is light brownish gray, slightly darker in females, with an ill-defined dark gray marginal band, and dark discal spot, veins, and terminal line. The hindwing fringe is white with a striped ochre and gray base. The thorax is dark red-brown in forms with a light costa, with ochre at the base of the collar separated from the darker edge by a thick black transverse line, dark and light edges on the tegulae, and pale tufts on the median thorax; the entire thorax matches the forewings in blue-gray and dark females. A frontal tubercle is present. The male antenna is moderately bipectinate. Euxoa perexcellens is placed in the large subgenus Euxoa.

Males and females with a light costa are distinctive due to their relatively large and vividly colored and patterned forewing with large reniform spot containing pale yellow. It can be confused with Euxoa wilsoni on Pacific Coast beaches. In E. perexcellens a light subterminal line separates the light subterminal area from the gray terminal area, whereas in E. wilsoni the transition between these areas lacks pale scales. Structurally, E. perexcellens but not E. wilsoni has a frontal tubercle. In the Cascades and further east E. perexcellens is most similar to some forms of Euxoa ochrogaster, but has a larger claviform and more light scales in the other forewing spots than this species. The males also resemble Euxoa olivia, a common fall-flying dry-side species, but are larger, more vividly colored, and have darker hindwings. Blue-gray and dark black-brown E. perexcellens females resemble some forms of Euxoa tessellata but are larger. If in doubt, the shape of the ovipositor lobes can be examined. They are bluntly truncated and covered in short studded setae in E. tessellata, conical and covered with fine hair-like setae in E. perexcellens.

Euxoa perexcellens is generally distributed throughout our region south of southern British Columbia. It occurs on both sides of the Coast and Cascade Ranges, including on the immediate Pacific Coast.

The range of this species is mostly restricted to the vicinity of the Pacific Coast and extends south to southern California from the Pacific Northwest. There is an isolated population in northern Michigan (Lafontaine 1987).

Adults fly in late summer and fall, with most records in our region from late August to mid-September. It is nocturnal and comes to lights.

This species has been reported to be a serious pest of vegetable crops in southern British Columbia, although these reports may be misidentifications of the similar E. ochrogaster.