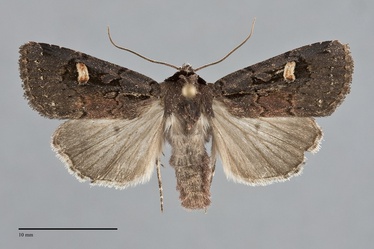 Adelphagrotis indeterminata is a distinctive, small to medium-sized (FW length 14 - 16 mm) blackish gray-brown moth with a light orange reniform spot and a collar with a light brown base and thick black bar across the tip. The forewing is dark purplish gray with warmer brown in the posterior median area. A black basal dash is present. The transverse lines are black. The antemedial and postmedial lines of many individuals are markedly irregular across the posterior median area and are partially fused with each other and the black claviform spot to produce a series of transverse black marks. The subterminal line is a series of light yellow spots and is preceded by a dark mark at the costa. The orbicular spot is inconspicuous, evident mostly due to black filling of the cell from the antemedial line to the reniform spot that accentuates its ground color filling. The reniform spot is black, kidney-shaped, and very prominent due to filling with ochre and burnt orange. The hindwing is gray, darkest near the margin, with a dark discal spot and lighter gray two-toned fringe. The head and most of the thorax are even purplish gray. The base of the collar is whitish gray and the dorsal portion is a broad black band. The male antenna is beaded.

The combination of light orange reniform spot, dark brown-gray forewing, and white and black collar are diagnostic of this species. Adelphagrotis stellaris has an orange reniform spot but its forewing is lighter blue-gray and its collare is pale with a thin black line rather than the thick bar of A. indeterminata.

The type locality of Xylina indeterminata Walker is Vancouver Island. The synonym Agrotis washingtoniensis Grote was described from Washington Territory.

This species is widely distributed in forest habitats.  It is most common in oak woodlands and mixed hardwood forests at low elevations west of the Cascades.  It is usually uncommon to rare in coastal rainforests, mixed hardwood-conifer forests, spruce-fir forests, and dry, open ponderosa pine forests at middle to high elevations in the Cascades and Rocky Mountain regions.

Adelphagrotis indeterminata is found throughout much of our region north to southern British Columbia and east to the Idaho Panhandle and adjacent northwestern Montana. It is most common west of the Cascade Range and has not been collected in eastern Oregon south of the Blue Mountains or in most of Idaho.

The range of this species extends south through California to just north of the border with Mexico.

This species is a generalist feeding on many kinds of hardwoods in such genera as Salix in the Salicaceae, Holodiscus, Rubus, and Spiraea in the Rosaceae, Ceanothus in the Rhamnaceae, and Symphoricarpos in the Caprifoliaceae.

This species has been collected from early July to early September in our region. It is nocturnal and comes to lights.