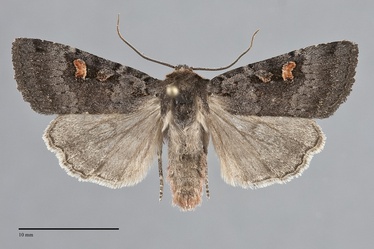 Adelphagrotis stellaris is a blue-gray, medium-sized moth (FW length 15 - 17 mm) with an orange reniform spot and whitish gray, rose, or light orange collar. The forewing is steel gray, slightly darker gray or reddish gray in the median area and preceding the subterminal line. The transverse lines are dark gray, double, with slightly paler gray filling. The antemedial line is slightly irregular. The lightly scalloped postmedial line is focally drawn toward the base opposite the reniform spot. A dark median line is evident in most specimens. The pale subterminal line is preceded by a dark gray to reddish shade that forms a darker spot at the costa. A series of dark lines between the veins forms the terminal line. The orbicular spot is black with a thin luteous inner line, slightly irregular ovoid in shape, and is open toward the costa. It is usually filled with the color of the adjacent forewing but is evident due to dark gray, red-brown, or black filling of the cell in most specimens. The dark filling of the cell is limited to the posterior portion in some individuals and can be entirely lacking. The reniform is black, kidney-shaped, and filled with ochre to bright burnt orange scales and a dark lower spot. The claviform spot is absent or faint. The hindwing is light gray with faint discal spot, postmedial line, submarginal line, and a thin terminal line. The fringe is slightly lighter gray. The head and most of the collar are light chalky gray, light rose, or light orange with a thin black line at the tip of the collar. The remainder of the thorax is darker brown-gray to reddish gray. The male antenna is biserrate.

The combination of orange reniform spot, blue-gray ground color, and light collar are diagnostic of this species. Adelphagrotis indeterminata has a similar burnt orange reniform spot but is much darker gray and has a distinctive collar with a light base and black bar-like dorsal portion.

The type locality of Agrotis stellaris Grote is Washington Territory.

This species occurs in moist forests along the West Coast.  In the Pacific Northwest, it is common in coastal rainforests, oak woodlands, and mixed hardwood forests at low elevations, and in mixed hardwood-conifer forests at middle elevations.

Adelphagrotis stellaris is restricted to the western portions of our region south of Lillooet, British Columbia. It is found west of the Cascade Range crest in Oregon and Washington.

This species is found in western California to Monterey Bay south of our region.

This species is a generalist feeding on many kinds of hardwoods in such genera as Vaccinium in the Ericaceae, Symphoricarpos in the Caprifoliaceae, Cornus in the Cornaceae, Rhamnus and Ceanothus in the Rhamnaceae, and Rubus, Holodiscus, Physocarpus, and Oemleria in the Rosaceae.

Adults fly in July and August in the Northwest. They are nocturnal and come to light.