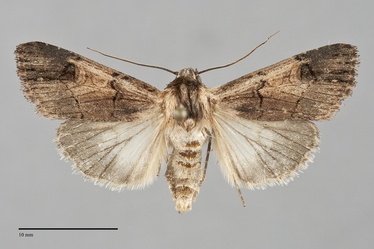 Dichagyris grotei is a rarely collected moth in the Pacific Northwest which has a very distinctive forewing pattern consisting of a charcoal gray apex against a dull, wood-brown ground. It is medium-sized (FW length 15–16 mm) with predominantly wood-brown ground color, slightly lighter in the anterior median area and darker at the trailing margin. The apex is dark charcoal-gray distal to the reniform spot. The veins are thin and black, and there is a series of black lines between the veins in the dark apical portion of the forewing. The black antemedial and postmedial lines are partially double. The antemedial line is slightly irregular toward the costa, then nearly straight to the trailing margin. The postmedial line is oblique toward the outer margin to the level of the lower cell, then bent sharply toward the forewing base with a slight outward-concave shape. The spots are thin and black and are filled with light brown similar to the adjacent median area. The orbicular spot is a faint oval. The reniform spot is also faint, except for the lateral portion. The hindwing is pale whitish at the base with a wide gray marginal area, dark veins, and two-toned fringe. The head and anterior thorax are dark blackish-brown. The remainder of the thorax is wood-brown. The male antenna is filiform.

This species is easily identified due to its brown forewing with black apex.

This species is mostly found on the dry short-grass prairies of the southern Great Plains, and on desert grasslands in the Southwest at low elevations. It occurs in a rocky canyon with sparse juniper and mountain mahogany in eastern Oregon, and in a mosaic of sage slopes and mixed maple-fir forest in southeastern Idaho.

Dichagyris grotei has only been found in or near the Snake River Canyon at the Oregon-Idaho border and in the Wasatch Range of south-eastern Idaho in our region.

This species has a wide range across North America. It is found from Pennsylvania and the Florida Panhandle in the East to northern Wyoming, Utah, Arizona, and the Pacific Northwest in the West.

This species feeds on herbaceous plants of the family Asteraceae such as the genus Kuhnia.

Adults have been collected from late July to late August in our region. They are nocturnal and come to lights.