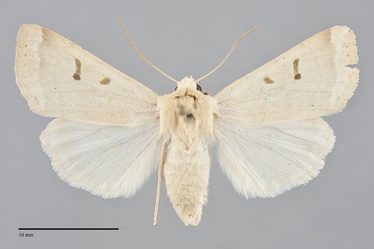 Dichagyris variablis is an aptly named species with smooth, variably-colored, cream, warm tan, or orange-brown forewings with light to dark-filled spots. It is medium-sized moth (FW length 16–19 mm) that is found in a variety of dry forest and open habitats in our region as far north as south-central British Columbia. The forewing transverse lines are darker shade of the ground color, often reddish and double, with slightly darker inner and lighter outer components and pale filling. The antemedial line is sinuous, especially anteriorly, and the postmedial line is smoothly excurved toward the outer margin. The slightly sinuous light subterminal line is preceded by a darker shade, strongest at the costa, that is similar to the other lines in color. A series of terminal dots are present between the veins at the base of the fringe, which often has a red tint. The orbicular and reniform spots are pale and are filled with the ground color or contrasting dark gray-brown. The orbicular spot is a small circle or oblique bar. The reniform spot is a transverse bar or weak figure-eight shape. The hindwing is cream in pale specimens and pale yellow-brown to pink-brown with darker submarginal shade and discal spot in darker specimens. The head and thorax are uniform, the same color as the forewing ground color. The male antenna is filiform with dense, short fasciculations.

This species can be identified by the light yellow-brown to orange-brown color, smooth postmedial line, narrow upright reniform spot, and white hindwing. Individuals are most similar in color to pale forms of Mesogona olivata, with which it flies in late summer and fall. Mesogona olivata has a much wider reniform spot and a series of dark spots medial to the subterminal line, which D. variabilis lacks.

Larva is smooth, mottled dark yellow-gray with a broad pale yellow-gray middorsal band.  It is illustrated by Lafontaine (2004).

This species is found throughout much of the Pacific Northwest as far north as the Fraser River Canyon south of Lillooet, British Columbia. It is most common and widespread east of the Cascade Mountains.  It is less commonly found west of the Cascades. It appears to be restricted to prairie-like habitats in British Columbia and Washington near the Gulf of Georgia and the south Puget Sound and but is more widespread in western Oregon..

Dichagyris variabilis is widespread in western North America from the western Great Plains to the Pacific Coast. It has been found as far north as southern Saskatchewan and Alberta and as far south as the southern parts of Colorado, Utah, and California.

This species appears to be a generalist feeding on many kinds of herbaceous vegetation in such families as the Rosaceae and Asteraceae.

Adults are single brooded and fly during the summer and early fall. Pacific Northwest records are from late July to late September. It is nocturnal and comes readily to light.