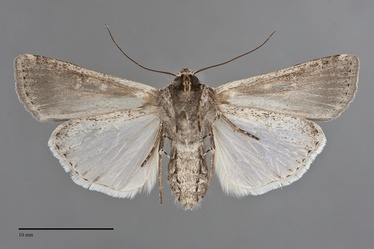 Hemieuxoa rudens is a small to medium-sized moth (FW length 13–17 mm) with distinctive but variable forewing pattern, typically with long black basal dash and a similar black mark in the posterior part of the cell . The most recognizable form is pale gray with slight dusting of darker scales, browner and more mottled on the costa and chalky white on the base of the costa. Dark gray is present in the terminal area and as a quadrate spot on the costa in the subterminal area. A large black basal dash extends to below the orbicular spot. The posterior dash is diffuse and indistinct, filling much of the basal area below the cell. The other black mark is a well-defined black bar in the posterior cell between the orbicular and reniform spots. These spots are outlined by a thin black line, are filled with light tan peripherally and have a darker center, a small dot in the case of the orbicular spot. Ordinary lines are reduced to dots on the costa except for the postmedial line that is an arc of small dark dots. A form without the basal dash or median bar is less common. It tends to be browner and more heavily spotted, appearing sandy or dusty. The other markings are preserved in this form, including dark areas on the distal wing and distinct orbicular and reniform spots. Neither form has a claviform spot. The hindwing is pearlescent white with gray marginal shading, dark veins, and a tricolored fringe but lacking a discal spot. The head and thorax usually match the forewing ground color but can be reddish brown. The male antenna is weakly biserrate.

Specimens of H. rudens with black basal dash and black bar in the posterior cell are unlikely to be confused with other moths in are area. In particular, the diffuse basal dash and contrasting pale base anterior to the dash are characteristic. Specimens lacking the dashes are similar to Euxoa bochus, both in size, color, and "dusty" look of the forewing. The forewing spots of H. rudens are more distinct than those of E. bochus, especially the orbicular spot with small central ocellus. In spread specimens, the pearlescent white hindwing of H. rudens is paler and shinier than those of lookalikes.

This moth occurs in a variety of desert habitats in the Southwest. The only Pacific Northwest record is from the city of Medford. It is most likely a vagrant in our region and could therefore be expected to be found in almost any habitat.

The presence of this moth in the Pacific Northwest is based on a single photograph from Medford, Oregon. This is a great example of how anyone with an interest in natural history has the ability to make significant discoveries. It is possible that the range of this moth is extending northward because of global warming.

This species might also be found in southern Idaho because there are numerous records of it from the vicinity of Salt Lake City, Utah.

Hemieuxoa rudens is found in the south-central and south-western States in the United States as far east as east Texas and as far north as Nebraska and Utah. It is a common moth in the desert Southwest. The range extends south to Bolivia and Ecuador (Lafontaine 2004).

The larvae have been reared on broomweed (Xanthocephalum wrightii) and grasses according to Crumb (1956).

The only Oregon record of this moth is from mid-August. Farther south this moth is double brooded with spring and late summer flights.