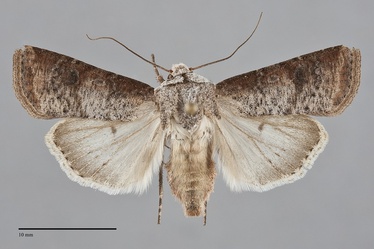 Euxoa bochus is a distinctive, small to medium size moth (FW length 14–17mm) that flies east of the Cascade and Coast Range summits during summer and early fall. It has a finely speckled, light violet-gray forewing with a dark red-brown costa. In addition to these features of the forewing, the terminal area is dark gray-brown. The lines are dark gray, usually absent or incomplete. The median line is dark red-brown and the postmedial line is comprised of a series of black spots. The median line is a series of smaller spots. The fringe is gray with a tan base. The orbicular and claviform spots are absent, and the reniform spot is a blackish gray kidney-shaped spot. The hindwing is nearly white with a faint margin shade in females, and small dark discal spot, dots on the veins along the course of the postmedial line, and dark terminal line. The hindwing fringe is white. The head and thorax are gray with a very thick velvety bar across the collar. A frontal tubercle is present. The male antenna is weakly biserate. Euxoa bochus is the only member of the subgenus Crassivesica, considered to be a primitive lineage of the genus Euxoa (Lafontaine 2004).

This species can be recognized by the two-toned dark red-brown and light gray forewing with abundant black speckling, a postmedial line comprised of black spots, and very broad dark band across the base of the collar. It is unlikely to be confused with other moths in our area.

Larva is smooth, yellow-green with a pale dorsal band and darker brown subdorsal and lateral lines.  It is illustrated by Lafontaine (2004).

This species is found in dry, coniferous forest habitats of western North America.  In the Pacific Northwest, it is moderately common in dry, open ponderosa pine forests and juniper woodlands at middle elevations east of the Cascades, and is usually rarer in dry sagebrush steppe at low elevations.  It is not uncommon in spruce-fir forests at higher elevations.

Euxoa bochus is found in the drier interior parts of the Pacific Northwest from south-central British Columbia south. An isolated record from west of the Cascades is shown for southern Vancouver Island by Lafontaine (2004), but the species has not been found elsewhere in the Gulf of Georgia region. It has been collected in northern and southeastern Idaho.

This species appears to be a generalist feeding on various herbaceous vegetation in such families as Fabaceae and Asteraceae, but may also feed on grasses (Poaceae).

Adults fly in late summer and fall. Pacific Northwest records are from late summer through September. It is nocturnal and comes to lights.