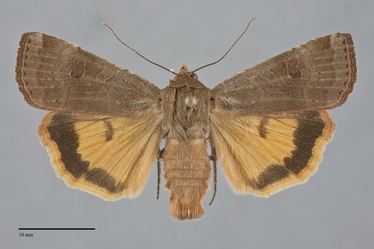 Noctua comes is a stout, moderately large noctuid moth (FW length 19 - 21 mm) with distinctive yellow-orange and hindwings marked by a black discal spot and marginal band. The forewings are relatively short and broad. The ground color ranges from even warm medium to dark tan, darkest medial to the subterminal line and lightest in the terminal area. The transverse lines are present but faint, sometimes only evident as a series of dark spots on the outer portion of the line. The reniform and orbicular spots are pale and are filled with the ground color. The orbicular spot is usually oblique, while the reniform spot is moderately large and weakly kidney-shaped. Both spots are filled with slightly darker brown than the ground color, and the lower portion of the reniform spot is usually dark gray. The hindwing is bright yellow-orange with a prominent black discal spot and marginal band and and orange fringe. The head, body, and thorax are even tan, like the forewing ground color. The male antenna is filiform.

This species is only likely to be confused with Noctua pronuba but is smaller and has stubbier wings. The dark hindwing discal spot of N. comes is lacking in N. pronuba. Cryptocala acadiensis is a smaller species found in forests in the eastern part of the Pacific Northwest that also has orange and black hindwings. In addition to being significantly smaller, its black hindwing band completely surrounds the wing unlike the marginal band of N. comes. Its range is north and east of that of N. comes.

This exotic species is widely distributed across Eurasia.  It was accidentally introduced into North America at Vancouver, British Columbia around 1982 and has been slowly spreading across the Pacific Northwest, reaching western Oregon around 2000.  Today, it is frequent to moderately common in coastal grasslands near the Pacific Ocean, and in disturbed grasslands, urban areas, oak savanna, and oak woodlands at low elevations west of the Cascades.  It is now spreading into drier, disturbed grasslands at low elevations east of the Cascades. Anectodal evidence suggests that this species has become less common after the arrival of Noctua pronuba to western Washington and Oregon since 2000.

Noctua comes is predominantly found west of the Cascade Mountains from southwestern British Columbia to north-western Oregon. It has also been found in southern Washington as far east as the Tri-Cities.

This is a Eurasian species. It is only known from the Pacific Northwest in North America.

This species is a generalist feeding on many kinds of herbaceous vegetation including such families as Polygonaceae, Scrophulariaceae, Asteraceae, Plantaginaceae, and Rosaceae.

Adults are predominantly nocturnal, but are commonly flushed from lawns or shrubs in urban environments during the day. It comes readily to lights. Pacific Northwest records extend from mid-June to October, suggesting the presence of multiple broods.

While this species has some potential to be a pest in agricultural and urban areas, it has not yet built up into the massive, epidemic infestations often seen with N. pronuba.