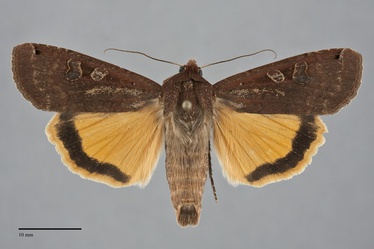 Noctua pronuba is a common, large noctuid moth (FW length 24 - 27 mm) that is found in a multitude of habitats in our region after spreading here in 2001. It has a long forewing in some shade of warm brown bearing prominent, small black dots near the apex, and a bright yellow-orange hindwing with a black marginal band but lacking a discal spot. The forewing is orange-brown, tan, dark red-brown, or dark brown, variable suffused with black scales and mottling and sometimes with a gray costa medial to the mid forewing. The transverse lines are slightly darker to absent with slightly paler light brown to gray filling. The pale subterminal line is preceded by two fused black dots at the costa. The orbicular and reniform spots are fairly large. The orbicular spot is light brown with pale tan, gray, or ochre filling. The renifrom spot is dark with a thin, light brown to ochre inner line and darker filling. The claviform spot is absent. The hindwing is bright yellow-orange with a sharply demarcated pure black marginal band and orange fringe. The head and thorax match the forewing color in most specimens. Some dark individuals have light brown head and collar and contrasting blackish brown remainder of the thorax. The male antenna is filiform.

This distinctive, large species can only be confused with Noctua comes, another introduced species that is found in the western part of the Pacific Northwest and east along the Columbia River (2011). Noctua comes has a large black discal spot on the dorsal hindwing that is lacking in N. pronuba. Noctua pronuba is larger than N. comes and has a longer forewing that is more variable in color.

This exotic species is widely distributed across Eurasia.  It was accidentally introduced into North America at Halifax, Nova Scotia around 1979 and rapidly spread across the entire North American continent, reaching the West Coast around 2001.  Today, this species occurs in massive, epidemic outbreak numbers in disturbed open grasslands, oak savanna, oak woodlands, and urban areas at low elevations west of the Cascades.  However, it has also been found in epidemic outbreaks in native, undisturbed meadows at high elevations along the summit of the Cascades, and may be a serious competitor with native moths and butterflies.  It is also common in dry, open ponderosa pine forests, juniper woodlands, sagebrush steppe, and disturbed agricultural areas at middle to low elevations east of the Cascades.  This species exhibits great ecological plasticity.

This species is native to Eurasia. It was accidentally introduced to eastern Canada and has since spread to most of North America south of southern Canada.

This species is a generalist feeding on many kinds of grasses and herbaceous vegetation in such families as Asteraceae, Fabaceae, Brassicaceae, Rosaceae, Chenopodiaceae, Apiaceae, Solanaceae, and Poaceae.

Adults appear to be highly vagile, and may migrate great distances. They have been collected from early May to the middle of October in our region. This species is nocturnal and comes to lights. Anectodal evidence suggests that N. comes has become less common in the Pacific Northwest since the arrival of N. pronuba.

This species has the potential to be a serious pest in both agricultural and urban areas.