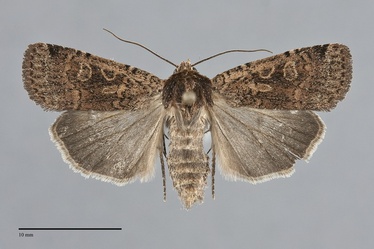 Parabagrotis cupidissima is an uncommonly collected, medium-sized noctuid moth (FW length 14 - 18 mm) with a speckled or powdery light brown to orange-brown forewing with lighter ochre to orange lines and spots and a semicircular orbicular spot that is open toward the costal margin. It is found in open forest and grasslands in the western part of our region as well as in the Columbia River Gorge. The forewing color is variable, usually a shade of light ochre-brown to orange-brown with a diffuse scattered dark scales that produce a powdery or speckled appearance not unlike fine sandpaper. Specimens from California can be washed out with limited dark markings, but this form has not been found in the Northwest. The darkest mark is a blackish spot near the apex medial to the subterminal line. The basal, antemedial, and postmedial lines are double, darker than the ground, and filled with light ochre brown to orange-brown. These lines are fairly smooth; the postmedial line is weakly scalloped. The subterminal line is undulating. The terminal line is a series of brown spots between the veins. The orbicular and reniform spots are pale, similar to the filling of the lines. The orbicular spot is open toward the costa, and semicircular in shape. The reniform spot is weakly indented, nearly oval. The claviform spot is pale. The hindwing is gray with darker gray toward the margin, very faint discal spot, and two-toned fringe with gray basal and whitish distal components. The head and thorax are light to dark gray-brown; the collar is weakly barred and has a thin dark line across its top. The male antenna is bead-like.

This species is most similar to some color forms of Parabagrotis formalis but can be identified by the lack of a thick black collar which is always present in this species. The semicircular orbicular spot is less elongate than that of the other Parabagrotis species. Some Abagrotis species, particularly Abagrotis baueri, are similar to P. cupidissima in color and pattern, but differ in having complete round orbicular spots.

The synonym Rhynchagrotis distracta Smith was described from Washington, Oregon, and California.

This species occurs in grasslands and oak woodlands.  In western Oregon it is common in dry disturbed grasslands, native prairies, oak savanna, oak woodlands,  mixed hardwood forests, and even disturbed urban and agricultural areas at low elevations west of the Cascades.  It also occurs in coastal rainforests and mixed hardwood-conifer forests at low to middle elevations, but is usually restricted to more open, disturbed habitats such as forest clear-cuts or the open areas along riparian zones. It is rare in similar habitats in Washington.

Parabagrotis cupidissima is found along the Pacific Coast states from southern Vancouver Island to southern California in the vicinity of Los Angeles. The distribution in western Washington is restricted to the Puget Trough south of Olympia and the Columbia River Gorge. It is more widespread in western Oregon west of the high Cascades.

The range of this species resembles those of other Parabagrotis species in that it extends south through California.

No information is presently available regarding larval foodplants of this species, but it may be a climbing cutworm specializing on grasses (Poaceae) based on the habitat.

This species has a long flight season and has been found from late May through October in the Northwest. It is nocturnal and comes to lights.