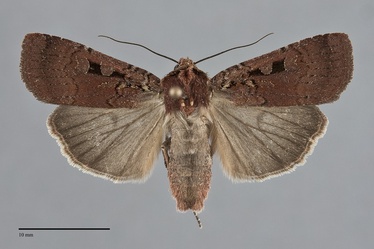 Parabagrotis insularis is our smallest Parabagrotis species (FW length 14 - 17 mm). It is variable in color and pattern but can usually be recognized by its reniform spot that opens toward the costa on a blackish gray to bright red-brown ground color. The forewing color is the most variable in this species, usually either uniform dull dark gray-brown or dark red-brown, but occasionally medium gray-brown with or without gray along the costa, or medium red-brown with an orange cast with or without a light grayish ochre costa. Some light red-brown specimens also have light ochre lines between the veins near the outer margin. The double gray transverse lines are usually evident in lighter individuals but often very obscure in dark specimens. The lines are often filled with light gray in gray specimens and light gray-brown to tan in light tan specimens. The subterminal line is a series of yellowish spots but is often absent. The orbicular and reniform spots are black with a thin yellow inner line, only evident as the yellow line, or evident only as paler gray filling in gray-brown specimens. The orbicular spot is broadly open toward the costa, while the reniform is often incomplete. The claviform spot is variably present and is either black or pale yellow. The hindwing is dark gray with slightly darker discal spot and veins. The head and thorax are the same color as the forewing ground color. The collar is variable, with or without a thin black line at its tip; the color in tan specimens is often similar to the lighter costa.

This species is most commonly confused with Abagrotis duanca which is similar in size, shape, and color. The orbicular spot of A. duanca is small and round, not open toward the costa like that of P. insularis. This species can usually be identified by its relatively small size, uniform dark gray-brown or red-brown color, and an orbicular spot that is open to the costa. Specimens with black filling of the cell are easier to identify than those that lack this feature.

Parabagrotis insularis is found in a variety of habitats throughout our region. It is common to abundant in open dry forests, mosaic forest and grassland, and sagebrush steppe at low to high elevations, but is also common in agricultural areas and urban areas. It is commonly found in dry forest in the Cascade Range of Oregon, but occurs less frequently in mesic forest.  Epidemic outbreaks have occurred in peppermint fields in central Oregon.

This species is found in the southern Coast Range and southern Vancouver Island in British Columbia. The range in Washington is predominantly east of the Cascade Range crest where the range extends east to the Idaho Panhandle and south to the Blue Mountains in eastern Oregon. It is less common in western Washington, but occurs in the Olympic Mountain rain shadow in the San Juan Islands and northern Olympic Peninsula. It is found in most of western Oregon. It is found uncommonly in high mountains in southeastern Oregon and southern Idaho.

The range of P. insularis extends south through California, predominantly west of the high Sierra Nevada, to near the border with Mexico.

This species is probably a generalist feeding on both grasses and herbaceous vegetation, but it may prefer herbaceous plants.  Epidemic outbreaks have occurred in cultivated peppermint fields in central Oregon.

Adults of P. insularis have a long flight period. They have been collected from early May to October, most commonly in early summer. They are nocturnal and come to lights.