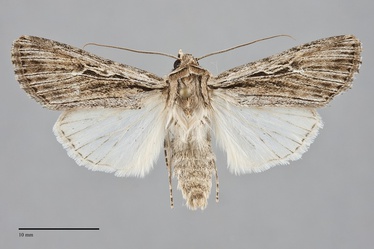 Protogygia lagena is the largest (FW 17 - 23 mm) of four similar, streaky, gray to brown species with fused forewing orbicular and reniform spots. They are difficult to identify by superficial appearance but can usually be sorted by combination of subtle features of the maculation, size, and flight period. The forewing of P. lagena is slightly reddish gray-brown in males and duller gray brown in females.  The forewings appear streaky, due to dark gray veins bordered by light gray and absence of the ordinary transverse lines. A series of dark gray wedges are present in the terminal area, and the terminal line is a series of black spots between the veins. A long, basal dash is present. A similar black line is present at the trailing margin in the median area. The elongate orbicular spot is somewhat diamond-shaped and is fused to the thin reniform spot. Both are pale and partially outlined with black. The central portions of the spots are filled with the ground color. The hindwings are white with slightly darker veins and terminal line in males and light gray with a gray marginal band, and dark gray veins and terminal line in females. The top of the head and base of the collar are light brown gray. A black line crossed the top third of the collar and the tip is gray tan like the rest of the thorax. The tegulae are lined with black around the margins. The male antenna is filiform with weak fasciculations.

Protogygia lagena can usually be told from Protogygia postera by flight season alone, since P. lagena occurs in early summer and P. postera does not fly until July. Protogygia lagena is also larger with coarser forewing markings with black wedge marks between the veins near the margin and dark terminal spots that most P. postera lack. Females of these species are distinguishable by the hindwings, gray near the margin with dark veins in P. lagena and white in P. postera. Protogygia enalaga flies with P. lagena and is closer to it in size than is P. postera. The ground color of P. enalaga is lighter gray than P. lagena, and its costa is lighter gray. The female hindwing is also lighter than that of P. lagena. Protogygia comstocki is also similar in size to P. lagena and flies with it in sandy habitats. The markings of P. lagena are better defined and the ground color is browner that those of P. comstocki which has a light brown gray color and "softer," less well-defined markings. As with the other species, the hindwings of P. comstocki are lighter than those of P. lagena.

This species is widely distributed in dry desert habitats throughout much of western North America.  In the Pacific Northwest, it is highly restricted to the driest of desert sagebrush steppe at low elevations east of the Cascades, and is most common to abundant in the Alvord Desert of southeastern Oregon.

Protogygia lagena is found in dry steppe in central Washington, eastern Oregon, and southern Idaho. Washington records are restricted to the eastern part of the Columbia Basin near the Columbia River. The range of this species is more extensive further south in our area.

This species reaches its northern limit in the Pacific Northwest. It is more widely distributed in California and the Southwest, ranging from eastern and southwestern California to northern Colorado and northern New Mexico.

Protogygia comstocki is single-brooded. The adults are on the wing in May and June at the same time as Protogygia enalaga but earlier than the similar species P. postera.  The records from our region extend into July.  It is  nocturnal and comes to light.