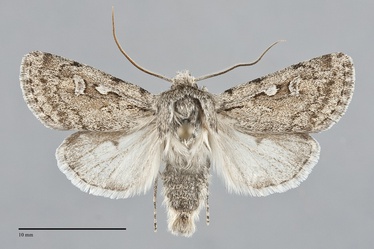 Protogygia arena is the smallest (FW length 14 - 15 mm) of four similar Protogygia species that have streaky gray to brown forewings with fused or nearly fused orbicular and reniform spots. The forewings are light to medium dark brown gray with dark gray transverse lines that are strong at the costa. The irregular antemedial line is more faint than the scalloped postmedial line. The smudgy gray subterminal line is preceded by dark wedges except near the apex. A thin black basal dash is present. The orbicular spot is elongate, often with a long extension to the wing base, is partially outlined in black and filled with whitish gray. The reniform spot is similar pale-filled but also has a darker center. The cell is often filled with dark gray between the spots. The hindwing is light gray with slightly darker discal spot and irregular marginal shading. The head and thorax are mouse gray. The male antenna is beadlike with strong fasciculations.

Protogygia arena can be identified by the combination of mouse gray thorax, brown gray forewings, and pale-filled elongate orbicular and reniform spots. It is the only desert Protogygia with light gray hindwings in males. Agrotis longicornis flies in similar sandy habitats in late spring and early summer. It is warmer fawn brown and light gray, including on the thorax, and the males have broadly bipectinate antennae unlike those of P. arena.

This species is narrowly endemic to sand dunes or sandy river sediments across southeastern Oregon.  It may be locally common to abundant in this very restricted habitat.

Protogygia arena is only known from south-central and south-eastern Oregon and southern Idaho in our region.

This species has a restricted range. The only known locality outside of Oregon is in Inyo County in eastern California.

No information is presently available regarding larval foodplants of this species, but it is probably a burrowing cutworm that burrows through sand and feeds on herbaceous vegetation.

Adults are single brooded and fly in late spring and early summer. The type series was collected from mid-May to mid-June.  Records of this species from late summer and fall are atypical and require closer evaluation.