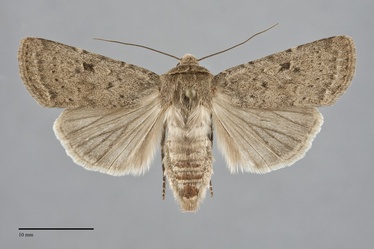 Rhyacia clemens is a dull gray-brown, moderately large noctuid moth (FW length 18 -21 mm) that flies in dry habitats in the interior of our region from late spring to fall. Its forewing has a dentate postmedial line and a dark, gray bar in the cell joining the orbicular and reniform spots. The forewing is nearly uniform powdery gray-tan, with a slightly darker median line and shade before the subterminal line in most specimens and a gray bar between the orbicular and reniform spots. The transverse lines are dark gray, double, and filled with the ground color. The antemedial line is irregular, especially near the fold. The postmedial line is deeply dentate with a series of dots marking the tips of the jagged teeth. The pale subterminal line is even, except for an offset below the apex. The terminal line is a series of small dots between the veins. The orbicular spot is dark but very faint, oval in shape, and filled with the ground color, lighter gray-tan, or pale gray. The reniform spot is pale and barely evident except for slightly darker filling which forms a diffuse gray spot in the lower end. The hindwing is light gray-brown with darker gray margin, thin discal spot, and veins and has a pale light tan fringe. The head and thorax match the forewing ground color. The male antenna is filiform.

This species is most easily distinguished from similar-sized tan moths by the dark area between the orbicular and reniform spots. It is most similar to Pronoctua typica and Actebia balanitis in general appearance but could also be confused with several Euxoa species. A few A. balanitis have a darker-colored cell, but the dark area includes the medial cell between the orbicular spot and the antemedial line unlike in R. clemens in which the dark area is limited to the portion between the spots. Also, the reniform spot of A. balanitis is outlined in black with a pale inner line, unlike that of R. clemens, which is pale and indistinct.

This species is widely distributed on arid rangelands throughout much of western North America, including dry short-grass prairie on the Great Plains and sagebrush steppe west of the Rocky Mountains.  In the Pacific Northwest, it is usually rare and sporadic, but may be locally common in dry, open ponderosa pine forests, juniper woodlands, and on sagebrush steppe at middle to low elevations east of the Cascades.  It also occurs in dry meadows and spruce-fir forests at high elevations along the summit of the Cascades and in the Rocky Mountain region, and in quaking aspen forests at high elevations in the Steens Mountains of southeastern Oregon.  It may be more common at higher elevations during warm, dry years.

Rhyacia clemens is widespread in the arid interior of Washington and Oregon. It does not occur west of the Cascade Range except in southwestern Oregon. A few records exist for south-central British Columbia.

The Pacific Northwest is near the center of this species' distribution. The limits of the range are southern Yukon Territory, southern Alberta and Saskatchewan, eastern Nebraska, south-central Utah, and the Mono Lake region of eastern California.

No information is presently available regarding larval foodplants of this species, but it may feed on grasses (Poaceae) based on closely related species.

Rhyacia clemens has a long flight period and has been found from mid-May through September in our region. It is nocturnal and comes readily to lights.