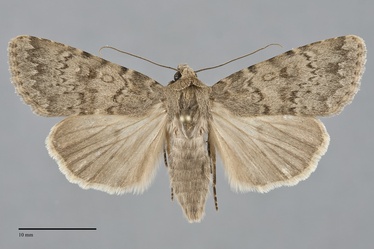 Pronoctua typica is a relatively large noctuid (FW length 20 - 22 mm) with dull gray-tan forewings with gray lines and spots. The forewing is suffused with gray at the median line and preceding the subterminal line. The transverse lines are gray, double, and filled with the ground color. The basal and antemedial lines are mildly irregular with the postmedial line is scalloped, especially the medial component. The pale subterminal line is jaggedly irregular. The orbicular spot is absent or very faint, oval, with filling of the ground color and rarely containing a darker ocellus. The reniform spot is faint and is filled with the ground color and dark gray inferiorly. The claviform spot is absent. The hindwing is light gray-tan with faint gray discal spot, veins, and terminal line. The fringe is slightly lighter. The head and thorax match the forewing. The male antenna is filiform.

This species is most likely to be confused with the other three Pronoctua species, all of which are less common, and Rhyacia clemens in our area. The forewing terminal areas of the other Pronoctua species are darker than the rest of the forewing, unlike that of P. typica, which is similar to the ground color or slightly lighter. The cell of R. clemens is filled with a short dark bar between the spots, unlike that of P. typica, which is traversed by the median line and is similar in darkness to the rest of this line outside of the cell and does not reach the orbicular spot.

This species is widely distributed in dry forests throughout much of western North America.  In the Pacific Northwest, it is usually rare and sporadic in dry, open ponderosa pine forests and juniper woodlands at middle elevations east of the Cascades.

Pronoctua typica is found in the dry interior of the Pacific Northwest as far north as south-central British Columbia. It is most commonly found on the east slope of the Cascade Mountains, but occurs further east in northeastern Oregon and in the Idaho Panhandle. It has not been found in southern Idaho or in south-eastern Oregon west of the Warner Mountains.

The range of this species extends south and east of our region to south-western California, eastern Arizona, northern New Mexico, and central Colorado.

Adults of Pronoctua typica are on the wing from late June to September in our region. They are nocturnal and come to lights.