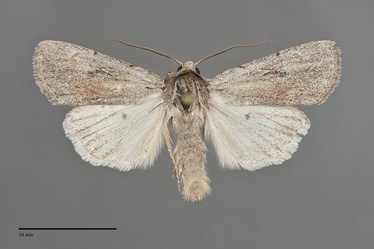 Setagrotis vocalis is a washed-out, pale gray, small to medium-sized moth (FW length 14–17 mm) that flies in south-eastern Idaho during late summer. It has a slight pink flush in the median area, variable black markings, and a white hindwing. The forewing is powdery but nearly even in darkness, variably suffused with light rosy pink on the posterior median area and in the cell. The cell is black in some specimens. A black basal dash varies from thin and short to thick and long. The basal, antemedial, and postmedial lines are variable, completely absent, gray, or black. When evident the basal line is weak. The antemedial line is strongest on the costa, slightly irregular and oriented perpendicular to the forewing. No median line is present. The postmedial line is sharply toothed on the veins, pulled toward the base on the costa, smoothly and widely excurved around the reniform spot and angled 45° toward the base and weakly concave below the cell. No median or subterminal lines are evident. A weak row of spots forms the terminal line. The fringe is concolorous with the terminal area. The orbicular spot and medial reniform spots are outlined in thin gray or thick black. The orbicular spot is oval or diamond-shaped, elongate, nearly reaching the reniform spot, filled with the ground color. The reniform spot is kidney-shaped, obscure except for the medial edge and filling that is barely lighter than the ground color. No claviform spot is present. The hindwing is white in males; white with light gray suffusion in the marginal region and darker gray veins, discal spot, and terminal line in females. The hindwing fringe is white in both sexes. The head and thorax are light gray, with a black edge on the collar in specimens with black markings on the forewing. The male antenna is weakly biserrate.

This species can be recognized by its eastern distribution near the Rocky Mountains, pale gray forewing with a rosy flush, black basal dash, and long oval or diamond-shaped orbicular spot. It is most likely to be confused with its close relative Setagrotis pallidicollis, a more common and widespread moth in the Pacific Northwest. Most specimens of S. vocalis are light gray, have less prominent red-brown on the forewing, and lack a median line, while those of S. pallidicollis are darker with more red color and have a diffuse dark median line. These differences are less obvious where the ranges of these species approach each other in Montana, so specimens from this region might have to be confirmed by dissection. The valves and vesicas of the male genitalia differ structurally. The most obvious difference is a wider base of the clasper of S. pallidicollis (Lafontaine 1998).

This species occurs in dry, open ponderosa pine forests, or in juniper-pinyon woodlands and Gambel oak woodlands at middle elevations in the southern Rocky Mountains and Great Basin.

This species barely enters our area in and near the Rocky Mountains in southeastern British Columbia and southeastern Idaho. It might be more widely distributed in our region than these few records suggest, especially in western Montana and eastern Idaho.

The range of this species is centered in the Intermountain Region of the American West. It occurs from eastern California to central Colorado and north-central New Mexico. The range extends north to southwestern Alberta near the spine of the Rocky Mountains.

No information is presently available regarding larval foodplants of this species, but it probably feeds on various hardwood shrubs based upon closely related species.

Setagrotis vocalis flies during the late summer and early fall, most commonly during July and August. It is nocturnal and comes to lights.