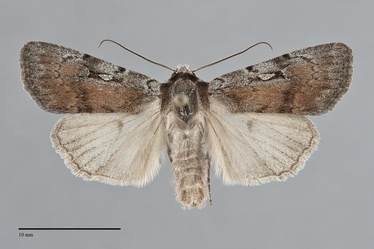 Setagrotis pallidicollis is a light gray, medium-sized noctuid moth (FW length 15–18 mm) that is suffused with red-brown along the posterior forewing and marked with black lines and a long, oval to diamond-shaped orbicular spot that is often fused to the reniform spot. It is common in a variety of habitats, especially dry forests, and flies during the summer. The forewing ground color is light to medium-dark gray, darkest along the diffuse median line but occasionally in the entire median area. A black basal dash is present in about half of the specimens. The basal, antemedial, and postmedial lines are single, black, and are usually clearly evident. The postmedial line is dentate with narrow teeth that form a series of short lines on the veins. The subterminal line is usually absent, although the position of the line is demarcated by a shade in some individuals. The orbicular spot is an elongate black oval or diamond filled with the gray ground color or slightly lighter gray; it is fused to the reniform spot which is small and faint except for its medial margin in most specimens. The claviform spot is absent. The hindwing is light gray with a slight yellow or brownish cast, shaded lightly with gray toward the margin, with darker gray veins and a fairly prominent discal spot. The head and thorax are light to dark gray, sometimes with a rusty tint, and usually has a black line across the tip of the collar. The male antenna is weakly biserrate.

This species can be recognized by its medium gray forewing with red-brown suffusion, basal dash, elongate orbicular spot, and diffuse median line. It is closely similar to Setagrotis vocalis, a species that is restricted to southern Idaho in our region. Setagrotis vocalis lacks but a trace of pink on the posterior forewing and has a much less prominent median line than S. pallidicollis. They also differ in the structure of the genitalia, with a narrower base of the clasper of the male valve in S. vocalis (Lafontaine 1998). The differences in superficial appearance between these species is smaller in the Rocky Mountains than in California so definitive identification might require dissection of specimens from eastern Idaho and western Montana.

This species is widely distributed in dry forest and woodland habitats.  In the Pacific Northwest, it is most common in dry, open ponderosa pine forests and juniper woodlands at middle elevations east of the Cascades.  It is sporadic and rare in spruce-fir forests at high elevations along the summit of the Cascades and in the Siskiyou Mountains of southwestern Oregon.

Setagrotis pallidicollis is widely distributed throughout much of the Pacific Northwest, especially east of the Cascade Range, as far north as southern British Columbia and east to western Montana. It is not generally found in sage steppe away from trees. West of the Cascades it is found in the rain shadow near the Strait of Georgia, both in British Columbia and Washington. It also occurs in the Siskiyou Mountains of south-western Oregon.

The range of this species extends south from our region through much of California to the Transverse Ranges north of Los Angeles.

Adults are found in the summer, with Northwest records from mid-June to early September. It is nocturnal and comes to lights.