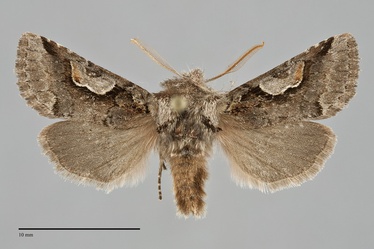 Stretchia muricina is a medium-sized noctuid moth (FW length 13 - 16 mm) that flies during the early spring. It has broadly fused orbicular and reniform spots, a brown median area, and a steel gray terminal area. The forewing has a pointed apex and scalloped outer margin. Most of the forewing is dark brown, darkest surrounding the fused spots and often with a purple tint in the antemedial and subterminal areas. The distal subterminal area and the terminal area are smooth steel gray. The anterior base is gray. The basal line is irregular, forming a lateral tooth toward the outer margin on the radial vein. The antemedial, and postmedial lines are thin, brown, usually inconspicuous except on the posterior wing. The antemedial line is slightly irregular, angled toward the outer margin from the costa. The median line is usually absent. The postmedial line is weakly scalloped, abruptly drawn toward the base on the costa, bent parallel to the reniform spot to below the cell, then angled further toward the base. The subterminal line is absent or pale gray, even, preceded by strong black marks at the costa and posterior margin. A terminal line of black lines is present. The fringe is gray, often with a red tint. The orbicular and reniform spots are broadly fused into butterfly shape, outlined in black outside and white inside. The orbicular spot is ovoid or rhomboid, filled with light bluish-gray. The reniform spot is oval, angled with the anterior portion lateral, filled with light gray anteriorly, red-brown centrally, and a short dark gray mark at the posterior end. The claviform spot is absent. The hindwing is smoky brown-gray with a slight reddish tint with slightly darker discal spot and veins. The hindwing fringe is similar in color, often redder. The head and collar are red-brown with faint transverse lines across the collar. The posterior thorax is red-brown to gray with dark edges on the tegulae and weak tufting. The eye is covered in fine hairs. The male and female antennae are both bipectinate, wider in the males.

This species can be identified as a Stretchia by the brown and gray color, V-shaped fused forewing spots, and bipectinate antennae. It can be distinguished from other Stretchia species by the dark brown median area and contrasting silver gray terminal area. Females of S. muricina have a wider bipectinate antenna than those of the other species.

Larva is smooth, green with thin, white dorsal, subdorsal, and lateral lines.  It is illustrated by Miller & Hammond (2003).

This species is found in moist forests throughout much of western North America.  In the Pacific Northwest, it is abundant in coastal rainforests and mixed hardwood forests at low elevations west of the Cascades, particularly in riparian zones along creeks and rivers.  It is also abundant in spruce-fir forests at high elevations along the summit of the Cascades and in the Rocky Mountain region.  It is less common in drier oak forests and mixed hardwood-conifer forests of the Siskiyou region, and in dry, open ponderosa pine forests east of the Cascades at middle elevations.

The range of this species extends east to Saskatchewan and south to Colorado and California. The California populations are limited to the Pacific Coast.

This species is a foodplant specialist feeding on currants (Ribes spp.) in the Grossulariaceae.

Stretchia muricina flies in the early spring like most other species in the tribe Orthosiini. Records from our area are from mid-March to mid-May. It is nocturnal and comes to lights.