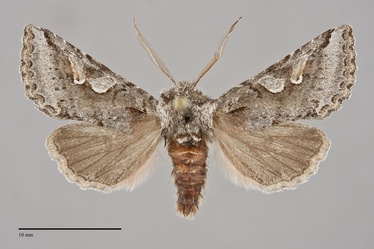 Stretchia plusiaeformis is a light gray medium-sized noctuid moth (FW length 13 - 16 mm) that occurs in the interior of the Pacific Northwest during the early spring. It has broadly fused orbicular and reniform spots that are surrounded by brown in the anterior median area. The forewing has a pointed apex and scalloped outer margin. The ground color is smooth gray, slightly lighter on both sides of the subterminal line. Dark brown is present on the mid- and anterior median area and on the costa in the subterminal area. A short basal dash is white anterior to black. The basal, antemedial, and postmedial lines are dark and light gray, darkest abutting the median area. The basal line is variable in prominence, usually bent zigzagged near the costa. The antemedial line is slightly irregular, slightly convex toward the outer margin, and slightly angled. The median line is very faint, diffuse gray to brown, usually evident on the posterior wing. The postmedial line is weakly scalloped, often with lines along the veins at the tips of the teeth, abruptly drawn toward the base on the costa and nearly straight elsewhere, strongly angled toward the base. The subterminal line is pale gray, even, preceded by irregular dark gray marks at either end and near M2 that are strong and wedge-shaped at the costa and linear at the posterior margin. A terminal line of short dark gray lines is present at the base of the concolorous fringe. The orbicular and reniform spots are broadly fuse into an eye-glass-like mark, outlined in black outside and white inside. The orbicular spot is ovoid or rhomboid, filled with light gray. The reniform spot is angled with the anterior portion lateral, ovoid, and filled with light gray anteriorly and variable red-brown and dark gray posteriorly and laterally. The claviform spot is absent. The hindwing is smoky brown-gray, including the fringe, with slightly darker discal spot and veins. The head is gray. The collar is dull light brown with a silver gray and dark gray edge. The rest of the thorax is gray with dark margins on the tegulae. The eye is covered in fine hairs. The male antenna is widely bipectinate and that of the female is widely biserrate to weakly bipectinate.

This species can be confused with all of our other Stretchia species. Stretchia muricina is the most common and widespread of these. It is brown over the entire median area and appear brown with a contrasting silver-gray terminal area white S. plusiaeformis appears predominantly gray. The female antennae of these species are different: those of S. plusiaeformis straddle the distinction between biserrate and bipectinate while those of S. muricina are wider bipectinate  Stretchia pictipennis is restricted to southwestern Oregon. This species has thick black spots at both ends of the subterminal line that are usually thinner and longer in S. plusiiformis . Its collar is warm brown, not gray as in S. plusiaeformis. Finally, Stretchia prima, a species from eastern Oregon, is more strongly powdery than S. plusiaeformis.

The genus Stretchia is in need of revision. The relationship of S. prima and S. plusiaeformis is particularly problematic in the Northwest.

This species is common and widely distributed in drier forest habitats throughout much of western North America.  In the Pacific Northwest, it is most common in dry, open ponderosa pine forests and mixed hardwood-conifer forests along the east slope of the Cascades and in the Rocky Mountain region.  It is usually uncommon to rare in the moister forests along the west slope of the Cascades and in the Siskiyou region, and is also uncommon in very dry juniper woodlands east of the Cascades.

Stretchia plusiaeformis is found at the periphery of our interior basin, usually in riparian situations in the foothills of the surrounding mountains. It ranges as far north as southern British Columbia.

This species occurs east to Smoky Falls, Ontario but does not occur further south in the East. Its range extends south to Wyoming and Colorado in the Rocky Mountain region and to California along the Pacific Coast.

This species is a foodplant specialist feeding on currants (Ribes spp.) in the Grossulariaceae.

Stretchia species are single brooded and fly in the early spring. Stretchia plusiaeformis flies from mid-March to mid-May in our region. It is nocturnal and comes to lights.

The larvae may cause damage to gooseberries (Powell and Opler 2009).