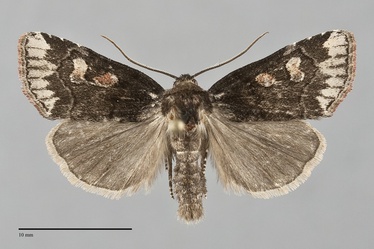 Cosmia praeacuta is a common, small to medium-sized moth (FW length 14–17 mm) that occurs in coniferous forests throughout our region during late summer. It has variable black to powdery gray forewings, pale gray to ochre filled spots, and dark gray hindwings. The forewing color is variable, usually powdery gray with faint yellow shading east of the Cascades and blackish with a rusty or wine-red suffusion west of the mountains. The base of the wing medial to the antemedial line and the anal angle are darker gray in light specimens. Some melanic specimens have extensive light yellow between the veins in the terminal area. The antemedial line is thick, black, and indistinct, smoothly convex toward the outer margin across the wing. The postmedial line is thinner black and weakly scalloped, drawn toward the base on both margins and S-shaped elsewhere, laterally convex around the reniform spot and concave in the fold. The median line is gray, strongest near the costa. The subterminal line is pale and uneven, usually evident across the wing but occasionally only near the apex. It is preceded by blackish gray shades at both margins. The terminal line is thin, black. The orbicular and reniform spots are similar, outlined in thin black lines and filled with light gray, light ochre-gray, or dull orange. The orbicular spot is oval, slightly diamond-shaped, or teardrop-shaped. The reniform spot is kidney-shaped. The claviform spot is black, small. The hindwing is uniform sooty gray. The fringe is pale yellow, pink in dark specimens with red-brown on the forewing. The head and thorax are gray, usually with rusty or wine-red on the central thorax. The male antenna is biserrate.

This species can be identified by the combination of even gray to black forewing with thick excurved antemedial line, uniform light gray, ochre, or orange spots, and dark hindwing. It is most likely to be confused with Cosmia elisae, especially east of the Cascade Mountains where the forewings of C. praeacuta are lighter gray. These species are most readily distinguished by the color of the hindwings. Those of C. praeacuta are uniform dark gray while those of C. elisae are mottled light and dark gray. The lateral reniform spot of C. elisae is more deeply indented than that of C. praeacuta. Melanic specimens of C. praeacuta from west of the Cascades are unlikely to be confused with other moths.

This species demonstates geographic variation in the Pacific Northwest. Populations from the western part of our region are much darker than those from east of the Cascade Mountains, frequently black with contrasting pale and reddish markings. The name nigramacula Barnes and Benjamin is available for these populations for those that wish to use subspecies.

Larva is smooth, green with middorsal, subdorsal, and lateral white stripes.  It is illustrated by Miller & Hammond (2003) under the name of Achytonix epipaschia.

This species is widely distributed in moist coniferous forests throughout much of western North America.  In the Pacific Northwest, it is particularly abundant in coastal rainforests and mixed hardwood-conifer forests of the Coast Range and along the west slope of the Cascades.  However, it is also common in subalpine spruce-fir forests along the summit of the Cascades, and in Douglas fir forests of the Siskiyou and Rocky Mountain regions.

Cosmia praeacuta is widespread in conifer forests throughout our region, occurring as far north as southern British Columbia. It is widespread west of the Cascade Mountains.

This species occurs from western Alberta and the Pacific Northwest south to Colorado, Arizona, and California.

This species is a foodplant specialist feeding on Douglas fir (Pseudotsuga menziesii) and true firs (Abies spp.) in the Pinaceae. A few foodplant records on Engelmann spruce (Picea engelmannii) are reported by Lafontaine and Troubridge (2003).

This species is single-brooded with adults on the wing in late summer and early fall. The records from our region are from mid-July to mid-September. It is nocturnal and comes to lights.