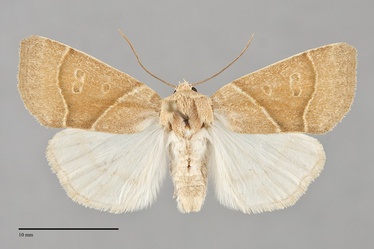 Cosmia calami is a broad-winged, small to medium-sized moth (FW length 13–16 mm) that is closely associated with oaks and flies during late summer. It has orange-brown forewings with markings limited to smooth pale antemedial and postmedial lines and spots. The forewing color ranges from pale yellowish-orange to dark orange-brown, often darker gray in the median area and occasionally pale on the veins in the terminal area. The dark basal line is evident on the basal costa. The antemedial and postmedial lines are light yellow outside the median area and darker orange-brown to gray adjacent to it. The antemedial line is angled 45° toward the anal angle, ending near the postmedial line at the trailing margin. The postmedial line is smoothly convex around the reniform spot and then straight to the trailing margin. The pale subterminal line is faintly visible at the costa in some individuals but is absent otherwise. The median line is absent. The orbicular and reniform spots are similar, outlined in pale yellow, fairly small, and filled with the ground color or gray. The orbicular spot is round. The reniform spot is bar-like or weakly figure-eight shaped with a dark spot in the lower third in some specimens. The claviform spot is absent. The hindwing is slightly yellowish off-white with a faint orange or pink hue toward the margin in some specimens. The head and thorax are uniform of the forewing ground color. The male antenna is weakly biserrate.

This species can be identified by its uniform orange forewing marked with pale yellow lines and spots. Species of Ipimorpha have smooth even forewing lines and yellow color but are more mottled and have darker hindwings than C. calami.

Larva is smooth, green with a thin white middorsal line and fine mottled white markings.  It is illustrated by Miller & Hammond (2003).

Cosmia calami occurs most commonly west of the Cascade Mountains as far north as southwestern British Columbia. It has a more limited distribution east of the Cascades where it has been collected in Klamath County in Oregon and from Klickitat County to Kittitas County in south-central Washington.

This species is widely distributed in North America. It occurs from Nova Scotia across the Continent wherever oaks are found. The southern limits of its range are northern Florida, Texas, Arizona, and southern California and the northern limit is Manitoba.

Cosmia calami is a foodplant specialist feeding on oaks (Quercus spp.) in the Fagaceae, but has also been found on wild hazelnut (Corylus cornuta) in the Betulaceae.  The primary foodplant in the Pacific Northwest is Oregon white oak (Q. garryana), and larvae can reach full development eating only oak leaves.  However in nature, the species is particularly carnivorous, feeding on insects and other caterpillars.  It particularly prefers eating inchworm (Geometridae) larvae.

The adults are on the wing in the summer and have been collected from early July until early September in the Pacific Northwest. They are commonly collected at lights.