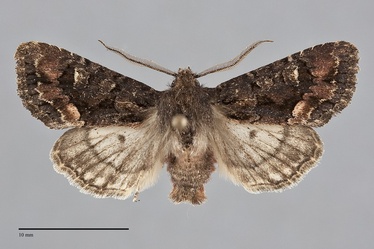 Dryotype opina is a small to medium-sized (FW length 13–16 mm), dark brown moth that flies west of the Cascades during the fall. It has white scales in the reniform spot, a shiny red-brown subterminal area, and a very wide male antenna. The outer margin of some specimens is slightly scalloped. The ground color is dark blackish brown with a slight purple tint. The subterminal area, and to a lesser extent the wing base, are shiny purplish red, lightest in the fold in the subterminal area. A black suffusion is present through the forewing fold, producing an ill-defined bar with the black claviform spot, and there is a short black dash and a black mark along the base of the trailing margin of the wing. The basal and antemedial lines are black, partially double filled with slightly lighter reddish brown. The antemedial line is irrregular with a strong tooth toward the margin on 1A+2A and a lateral bulge between this vein and the posterior margin. The median line is black, reduced to a mark on the costa and an irregular thinner line near the trailing margin. The postmedial line is toothed on the veins, drawn sharply toward the base on the costa, smoothly curved around the spot near its outer margin, and angled toward the base below the spot. The subterminal line is a series of yellow spots, slightly irregular. A series of black wedges preceding the line on the mid-wing and black lines on the veins across the entire terminal area are present, producing a strong W-mark on the mid-forewing despite the relatively straight course of the subterminal line. A series of black triangles comprises the terminal line. The fringe is dark reddish brown. The orbicular and reniform spots are outlined in black and filled with the ground color. The orbicular spot is round, often containing a few light scales but relatively inconspicuous. The kidney-shaped reniform spot contains many white or light yellow scales that are nearly continuous across its lateral edge. The claviform spot is black, small to moderate in size but usually prominent due to the thickness of the black line. The hindwing is light brown with a slight sheen, slightly darker gray near the margin, with dark veins, discal spot, postmedial line, and terminal line. The fringe is slightly darker and grayer than the rest of the wing. The head and thorax are dark black-brown. The male antenna is widely bipectinate.

This species can be identified by its western distribution, fall flight period, and dark blackish brown color with contrasting white in the reniform spot and shiny red-brown in the subterminal area. The wide antenna of the male helps to confirm its identity. This species is unlikely to be confused with other moths. Fishia illocata is a larger species that has dark red color on its forewing, a white reniform spot, and a wide male antenna. It is lighter gray-brown and wine-red and has a larger ovoid reniform that is more extensively filled with white than that of D. opina. Oligia tusa is a small dark gray and reddish moth that flies near the coast during the summer. It lacks the light reddish subterminal area of D. opina and the antenna is narrow in males.

The larva is smooth and green with a prominent white lateral stripe.

This species is narrowly endemic to the West Coast.  It occurs in open grasslands, native prairies, and oak savanna at low elevations west of the Cascades, and also in higher mountain meadows along the west slope of the Cascades and in the Siskiyou Mountains.

Dryotype opina is found in the western part of the Pacific Northwest from southwestern British Columbia to southern Oregon.

The range of this species extends to southern California west of the summit of the Sierra Nevada. It does not occur further east.

This species is a foodplant specialist feeding on certain legumes (Fabaceae).  In western Oregon, it primarily feeds on lupine species (Lupinus spp.), but has also been recorded feeding on peas (Lathyrus spp.).

This species flies in the fall, most commonly during September. It is nocturnal and comes to lights.